The Dodgers scored four runs in the sixth inning on its way to a 5-1 win over the San Diego Padres in Game 1 of the NLDS.
AP
By STEPHEN HAWKINS 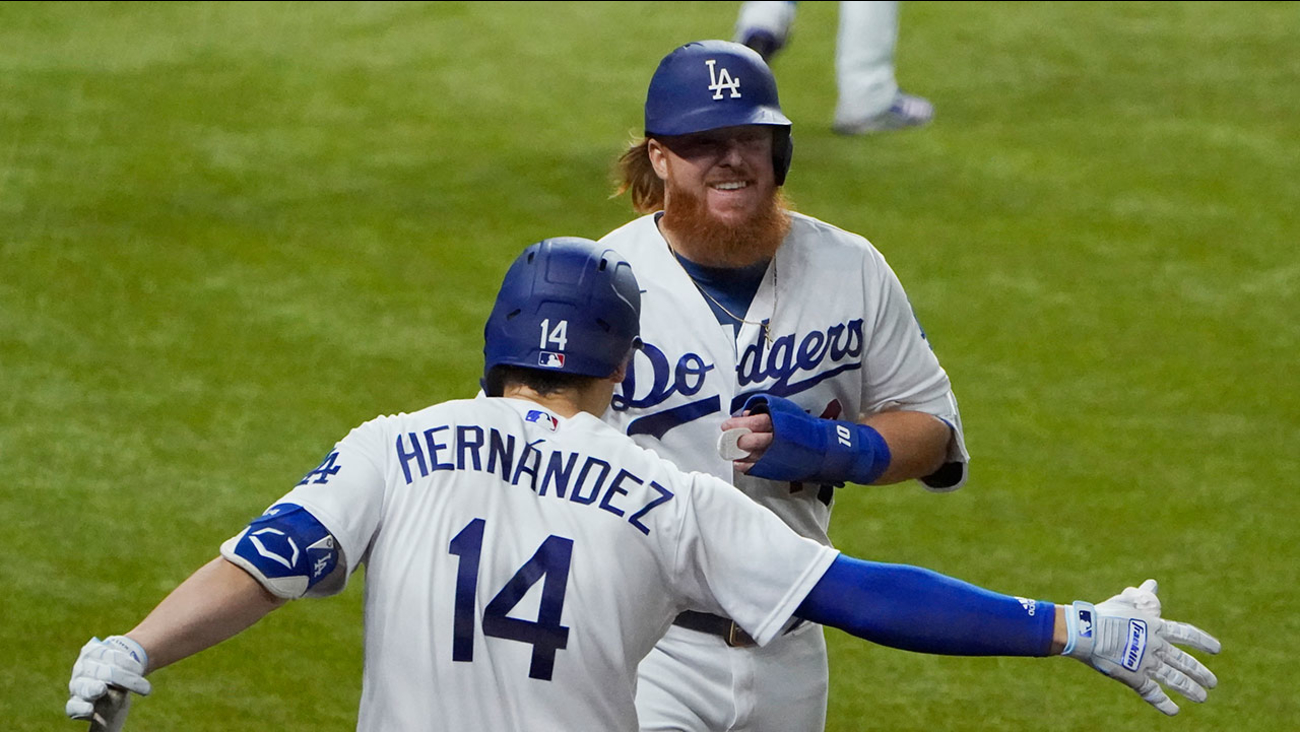 ARLINGTON, Texas -- It was a walk in the new park for the Los Angeles Dodgers to start the NL Division Series.

The Dodgers had already drawn nine walks before Mookie Betts got their first hit with one out in the sixth inning, and they went ahead to stay on Corey Seager's sacrifice fly right after that in a 5-1 win over the NL West rival San Diego Padres in the opener of the best-of-five series Tuesday night.

Mike Clevinger made it only two pitches into the second inning in his postseason debut for the Padres before leaving hurt, and their heavily worked bullpen couldn't keep putting up zeros - or keeping runners off base, even when not giving up hits.

Game 2 of the series, which is being played in the new Texas Rangers' ballpark, is Wednesday night.

When Chris Taylor, the No. 9 batter in the Los Angeles order, walked with one out in the sixth in a 1-1 game, it was the ninth walk through 27 batters and the Padres were already on their sixth pitcher. Betts then doubled into the left-field corner to break up the no-hitter, sending Taylor to third and setting up Seager's sac fly.

Los Angeles added three more runs after that, on RBI singles by Justin Turner and Cody Bellinger. Another run scored on a wild pitch. The Dodgers also got their 10th walk, matching Atlanta in 1997 for the most in a nine-inning NLDS game.

Dustin May (1-0), the 23-year-old Dodgers right-hander who grew up about 30 miles away in Justin, Texas, struck out three over two perfect innings in relief of Walker Buehler.

Garrett Richards (0-1), the sixth of nine Padres pitchers, was gone after giving up the hit to Betts. And so was manager Jayce Tingler, who was ejected by plate umpire Lance Barrett when making yet another pitching change.

With injured starters Clevinger and Dinelson Lamet out for the first round, the Padres became the first team to use at least eight pitchers in three consecutive playoff games. Nine relievers combined on a four-hit shutout in the Game 3 clincher over the St. Louis Cardinals last Friday.

The nine pitchers in a nine-inning game is a postseason record, and the Padres have now done it three times in four games.

Clevinger had left his last regular-season start Sept. 23 after one inning because of an elbow impingement, but was added to the Padres' 28-player NLDS roster earlier Tuesday, when he was named the starter for Game 1. The herky-jerky right-hander, acquired from Cleveland in a nine-player trade Aug. 31, walked two and threw a wild pitch in a scoreless first.

Tingler and a trainer visited the mound after Clevinger went 2-0 on Bellinger to start the second, and the pitcher left after a brief conversation. It was only his second start start since a two-hit shutout in a seven-inning complete game Sept. 13.

Buehler struck out eight, but the right-hander who has dealt with blisters all year needed a season-high 95 pitches to get through four innings. He walked four and allowed only two singles.

That included Austin Nola's two-out RBI single in the fourth that drove home Wil Myers, who walked before stealing second base.

In the stadium where the Padres began their record streak of grand slams in four consecutive games, Buehler walked the bases loaded with one out in the second inning. Buehler got out of the jam with strikeouts of Jurickson Profar and leadoff hitter Trent Grisham, but finished that inning already with 53 pitches and more balls than strikes (27-26) .

The Padres had lost five in a row when they got to Texas on Aug. 17, but hit grand slams in four consecutive games against the Rangers - two at the new stadium when the roof was closed, and then the next two games played in San Diego. That was also the start of a seven-game winning streak that pushed the Padres into second place in the NL West for the rest of the season.
Report a correction or typo
Related topics:
sportssan diego padresmlblos angeles dodgers
Copyright © 2020 by The Associated Press. All Rights Reserved.
More Videos
From CNN Newsource affiliates
TOP STORIES