VIDEO: Woman says Mexicans 'think they own America' when asked to pick up dog poop 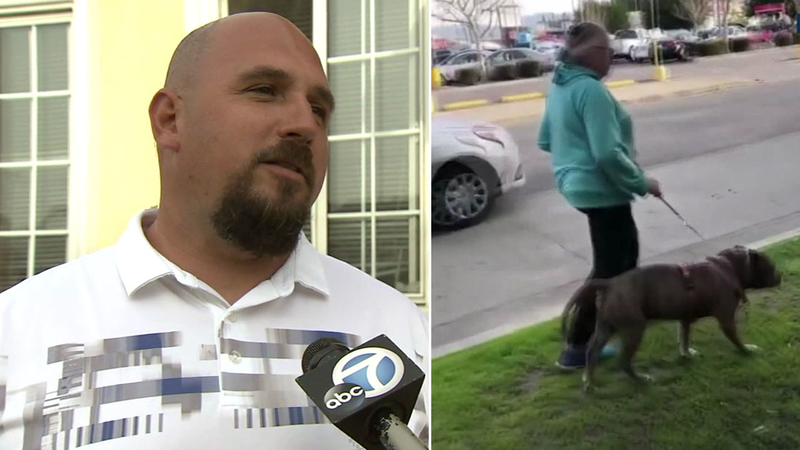 Mexicans 'think they own America'; racist rant caught on video

NORTH HOLLYWOOD, Calif. (KABC) -- A North Hollywood man captured video of a woman telling him to "go back to Mexico" after he asked her to pick up her dog's poop.

Jardiel Ochoa said he asked a woman to pick up her dog's poop from the sidewalk and grass outside the school where he works when she began hurling racial insults at him. He started filming and captured the rest.

"You want me to go back to Mexico?" he asks as the recording begins.

When he asks why, she says "because I'm tired of your bossy attitudes."

A North Hollywood man captured video of a woman saying she was tired of Mexicans' "bossy attitudes" after he asked her to pick up her dog's poop.

Ochoa then starts to say that he is in charge of caring for the property before the woman interrupts him.

"No it isn't your property, you just think it's your property because you're Mexican," she says, adding, "That's how Mexicans are. They think they own America, but we're sending them back."

The video ends with Ochoa asking her to simply pick up after her dog the next time it happens.

He said he was surprised that his simple request fueled the woman to go on the racist rant.

"You see it on TV and you see it online all the time, but you never think it's going to happen to you," he said.

Ochoa said he asked the woman to pick up her dog's poop because he didn't want anyone to step in it and he works as a plant manager for the school.

The San Fernando Valley native said he recorded the video to protect himself from a "he said, she said" scenario. His takeaway from recording the video is that people should be more tolerant and not assume everyone is from Mexico.
Report a correction or typo
Related topics:
societynorth hollywoodlos angeleslos angeles countyschoolracismmexicandog
Copyright © 2021 KABC Television, LLC. All rights reserved.
TOP STORIES
Parents charged in school shooting arrested, plead not guilty
Hawaii to see blizzard with at least 12 inches of snow
Suspects in police vests beat, rob LA residents on doorstep
LA smash-and-grab arrests highlight concerns of zero-bail policy
Money found inside megachurch walls possibly tied to 2014 theft
How unusual to charge parents in school shooting? EXPLAINED
OC anticipating omicron variant
Show More
Gunmakers not liable for Las Vegas mass shooting deaths, court rules
Woman carjacked outside COVID testing site in DTLA
Threat of omicron, other variants looms over holiday travel
Bruno, male orangutan at the LA Zoo, dies at 42
Disneyland's 'It's a Small World' set to reopen after flooding
More TOP STORIES News