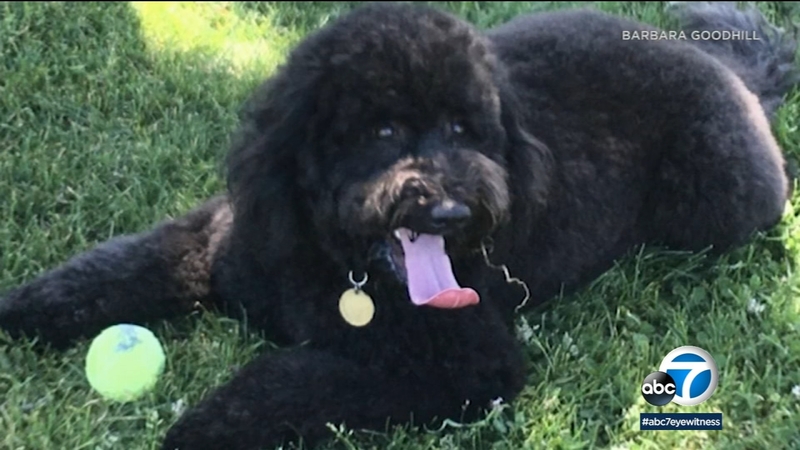 SHERMAN OAKS, LOS ANGELES (KABC) -- When Barbara Goodhill surveyed what was missing after a Friday night burglary, the Sherman Oaks woman skipped over all the missing jewelry and focused on her biggest loss.

"Not only had they ransacked my house and stolen items of value, they had stolen my dog," the 71-year-old told Eyewitness News.

That dog is Stella, her 4-year-old Labradoodle. During the break-in, she was home with Daisy, the old English sheepdog, but Daisy was the only dog left by the time police responded to the burglar alarm. Stella had been dognapped.

"She probably was trusting when they took her," Goodhill said. "She's just a bundle of joy and spirit and I guess too friendly for her own good."

But Stella is microchipped with Home Again and the company emailed Goodhill to let her know that the dog popped up at the VCA Advanced Care Center all the way in Lawndale.

Goodhill called VCA to ask about Stella and was told two men said they found the dog and had asked if they could drop her off. The staff told them they don't accept strays, but they did scan Stella for a microchip, triggering an alert at Home Again and spooking the men with the stolen dog.

"The two men realized they might get exposed clearly and they fled," said Goodhill.

Unfortunately they took Stella with them.

Now, LAPD is investigating and is expected to review surveillance video of the suspects from the animal hospital.

Goodhill has littered her neighborhood and the area around VCA in Lawndale with missing dog posters. She is also offering a $500 reward for Stella's safe return.

"What keeps me up every night since this happened is, 'Is she wandering the streets? Have they released her? Where is she? Is she being treated well?'" Goodhill shared with tears welling in her eyes.

Goodhill says that $500 reward can be picked up at The Pet Doctors of Sherman Oaks, at 13756 Ventura Boulevard. Whoever has Stella can drop her off there and collect the money with no questions asked.
Report a correction or typo
Related topics:
sherman oakslos angeleslos angeles countydogspetdogs stolen
Copyright © 2021 KABC-TV. All Rights Reserved.
More Videos
From CNN Newsource affiliates
TOP STORIES