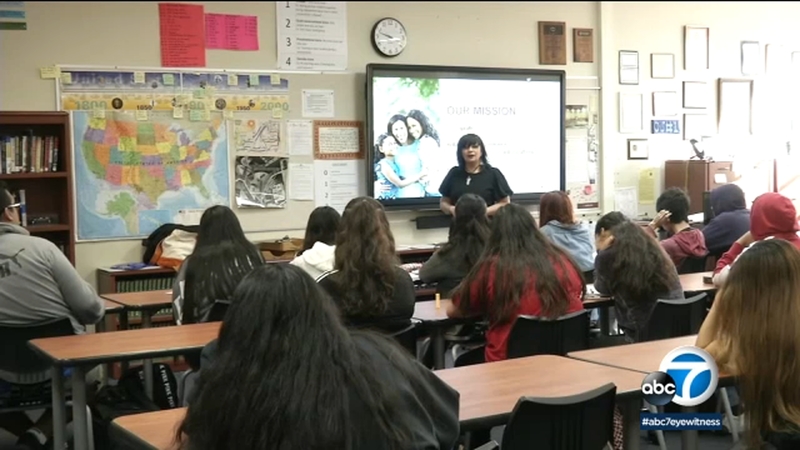 SANTA ANA, Calif. (KABC) -- Students at Santa Ana High School got a real life lesson on how to identify the warning signs of domestic abuse.

Marissa Presley, from the non-profit Human Option, talked to students about why dating abuse happens, why victims stay and the resources that are available.

"Domestic violence and dating abuse. It's a learned behavior," said Presley. "Santa Ana gets the most domestic violence calls out of any city in the county, which is really unfortunate."

According to Santa Ana Police, last year alone, the department received more than 5,300 calls for domestic violence. In the same year, 3,035 reports were taken for it.

Presley grew up in Santa Ana and witnessed violence in her own home and was abused herself.

"It affected my brain development, it affected the relationships that I got into, so if I could do it all over again and live that life again unfortunately, I would choose to do it. Because then I have a 12 year old to say to me, what your father did to you, is happening to me, and then I can hook them up with services," said Presely.

She hopes that by sharing her story, she can break down the barrier of embarrassment or shame.

According to BreakTheCycle.org, one in three high school students experience sexual abuse or physical abuse by someone they're dating.

Presley added, "And it's interesting because you know there's a plan in high school for bullying, there's a safety plan for mass shootings, for earthquakes, but not for this epidemic of one in three students."

Some students took it all in, and hope to use what they've learned with friends, or in their future careers.

"It's happened in my family so she was talking to me about it and I really like what she was telling me. It's kind of motivating me more to keep on going with the process," said student Alexa Monarez.

Michelle Reyes Medina, also a student, added, "I know many people that have been part of domestic violence, or has happened to them, so I think it's good to tell people about it so that when they get in that position, they know what to do."
Report a correction or typo
Related topics:
educationsanta anaorange countycrimeeducationabusehigh schoolteacherdomestic violencestudents
Copyright © 2021 KABC-TV. All Rights Reserved.
More Videos
From CNN Newsource affiliates
TOP STORIES