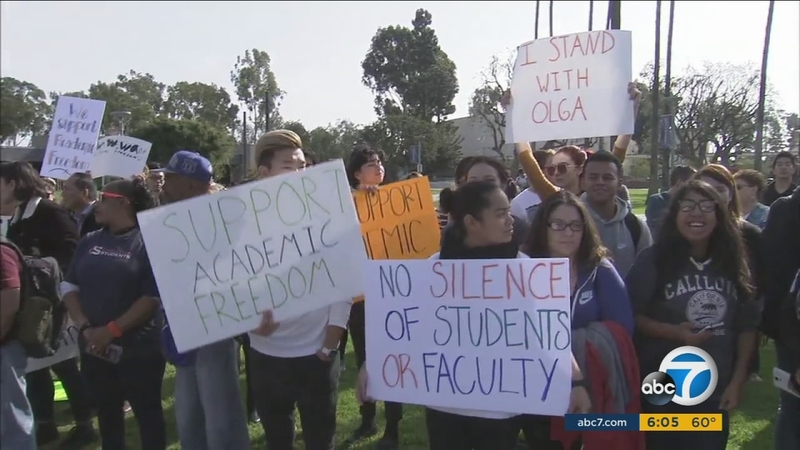 COSTA MESA, Calif. (KABC) -- More than 200 people gathered at Orange Coast College in support of a professor who went into hiding after receiving threats over controversial statements she made in class on Donald Trump's election win.

"Calling the election of Donald Trump an act of terrorism, well then who are the terrorists in this situation? Obviously the people who supported Donald Trump," said Joshua Recalde-Martinez, president of the Orange Coast College Republicans.

But supporters of the human sexuality instructor said her comments were taken out of context. A few minutes out of a three-hour lecture were taken by a student secretly recording it and later posted online.

"She was letting students know that she is a safe space, and if they have any concerns to feel safe in her class," student Karina Mendoza said.

Rob Schneiderman, an educator at the college, said the understanding was that Cox was answering a question. But one student who was in the class said Cox wasn't doing that. He said she also tried to single out Trump supporters.

"She tried to get Trump supporters to stand up in class so that everybody else knew who to look out for," student Tanner Webb said.

The union representing Cox said she has taught more than 30,000 students during her more than 40 years at the college. They also said she has never had a complaint against her during that time.

An investigation is underway. The college president said teachers need to stick to the syllabus and work in the best interest of the students.