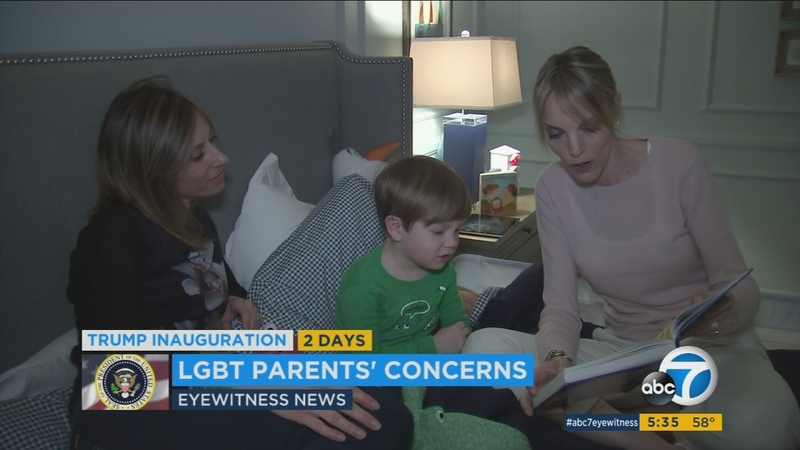 LOS ANGELES (KABC) -- Among the people wondering how President-Elect Donald Trump's administration will impact them are members of the LGBT community with children.

LGBT parents - like Jill and Nikki Weiss-Goldstein, who have two sons together - wonder what any potential rollbacks could do to their parental status.

Jill and Nikki are legally married and said they're witnessing a level of tolerance of their relationship unheard of in years past. The couple even appeared in a Campbell's Soup commercial together.

The couple has taken an extra step to make sure that Nikki, the non-biological mother of 4-year-old Adler and their infant son Gray, won't be in legal jeopardy if something were to happen.

"I called my attorney and she said, 'I don't ever want your rights to be challenged and you being on the name of the birth certificates of both of these children is not enough," Nikki said.

"Having your relationship validated is different than having your parentage validated," attorney Diane Goodman said.

Goodman said LGBT couples should get a court order known as a parentage decree or a step-parent decree. She especially recommends the legal move with the current White House administration change underway.

"The day after the election, my phone started ringing and clients who didn't think they needed to do a second parent or step-parent adoption now were concerned about their parental rights being in jeopardy," Goodman said.

"You're finally treated equally and you think it's just," Jill said. "Then suddenly now we are faced with a government that could just rip that right from us."

Many expressed concern that Trump could appoint justices to the Supreme Court who may be inclined to overturn marriage equality laws or leave it to the states to set their own standards for parental rights, which may leave out same-sex couples.

Goodman said the best defense is a court order that's recognized in all 50 states.

"I wouldn't wait," Goodman said. "This administration seems to be moving very quickly."