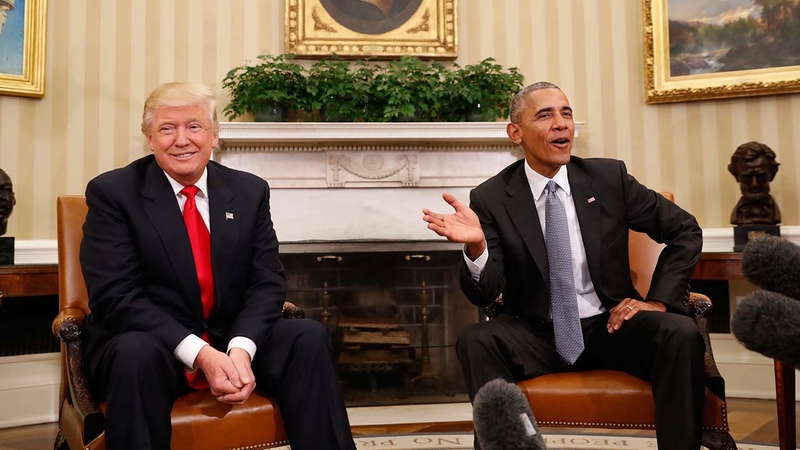 Trump also said he "very much looks forward" to dealing with Obama and called their meeting a "great honor."

Trump noted that he and Obama haven't met each other before. Their meeting lasted well over an hour.

President Barack Obama met with President-elect Donald Trump in the Oval Office of the White House in Washington, Thursday, Nov. 10, 2016.

Obama said that they had an "excellent" and "wide-ranging" conversation, and he was encouraged that Trump wanted to work with his team on issues facing the country.

"My No. 1 priority in the coming two months is to try to facilitate a transition that ensures our president-elect is successful," Obama said.

Trump said that Obama explained "some of the difficulties" but also "some of the really great things that have been achieved."


At the close of the Oval Office sit-down, Obama said to Trump, "We now are going to want to do everything we can to help you succeed because if you succeed, the country succeeds."

Obama had blasted Trump throughout the campaign as unfit to serve as a commander in chief, while Trump spent years challenging the legitimacy of Obama's presidency, falsely suggesting Obama may have been born outside the United States.

MORE: Hillary Clinton on Trump - "We owe him an open mind, chance to lead"

But at least publicly, the two men appeared to put aside their animosity. As the meeting concluded and journalists scrambled out of the Oval Office, Obama smiled at his successor and explained the unfolding scene.

If Trump makes good on his campaign promises, he'll wipe away much of what Obama has done during his eight years in office. The Republican president-elect, who will govern with Congress fully under GOP control, has vowed to repeal Obama's signature healthcare law and dismantle the landmark nuclear accord with Iran.

Their last interaction was at the White House Correspondents' Association dinner in 2011, when Obama relentlessly mocked Trump, who had then been fanning the flames of the so-called "birther" conspiracy.

President-elect Donald Trump's shocking victory in the 2016 election will bring a new first family to the White House.

This was Melania Trump's first trip to the White House, but not for Donald Trump who visited in November 1987 for a reception for members of the "Friends of Art and Preservation in Embassies" Foundation, and also in 1985 with his first wife Ivana for a state dinner for King Fahd of Saudi Arabia.

From the White House, Trump headed to Capitol Hill for meetings with House Speaker Paul Ryan of Wisconsin and Senate Majority Leader Mitch McConnell of Kentucky to discuss the GOP legislative agenda. Ryan, who holds the most powerful post in Congress, was a sometime critic of Trump, was slow to endorse him and did not campaign with the nominee.