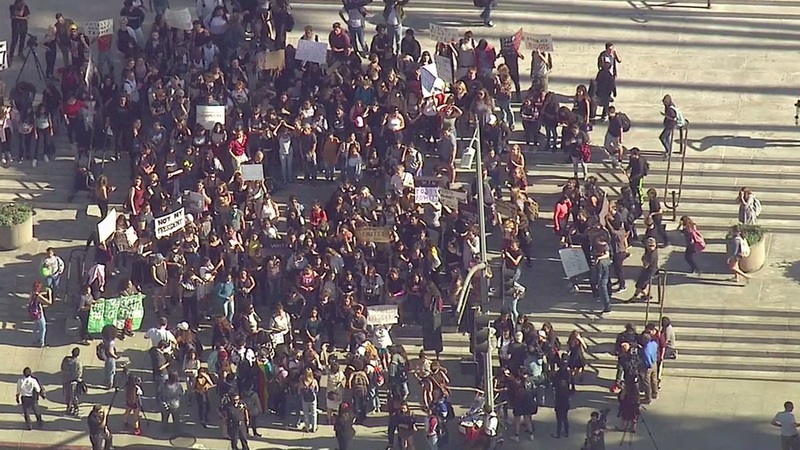 LOS ANGELES (KABC) -- At least 300 young adults and teenage students marched out of class Wednesday to protest the election of Donald Trump as president.

Students from Robert F. Kennedy Community Schools headed out to 6th Street and Shatto Place to meet with a large group. It was one of several walkouts at a Los Angeles Unified School District campus.

The students headed out to Los Angeles City Hall. Some chanted "Not my president" and held signs with expletives and others saying Trump was a terrible choice.

The group then made their way to the Staples Center. The demonstration was organized at 2 a.m. on Facebook by 18-year-old Lydia Debevoise, a California Institute of the Arts student in Valencia.

She said she was crying with her friends over the election results and decided to take action.

"If you care about politics and you're as angry as I am, then please come and protest the election of Donald Trump," she said.

She added that she just moved to Los Angeles from New York in September. Her Facebook post was quickly shared by hundreds of people, which led to the bigger attendance.

Debevoise said she does not want any man to have power over women, people of color and the LGBT community.

Superintendent Michelle King issued a statement addressing the protests. She said the 2016 election provided many "teachable moments" for LAUSD students.

But she added that while they are allowed to conduct peaceful demonstrations, it should not be done while school is in session.

"Because fears and emotions may be running high after the election results, we directed school-based staff to talk with students, and if necessary, identify those who may need support. In an abundance of caution, District staff also has initiated conversations about student rights," she said.

Students said another walkout was planned around noon Thursday.