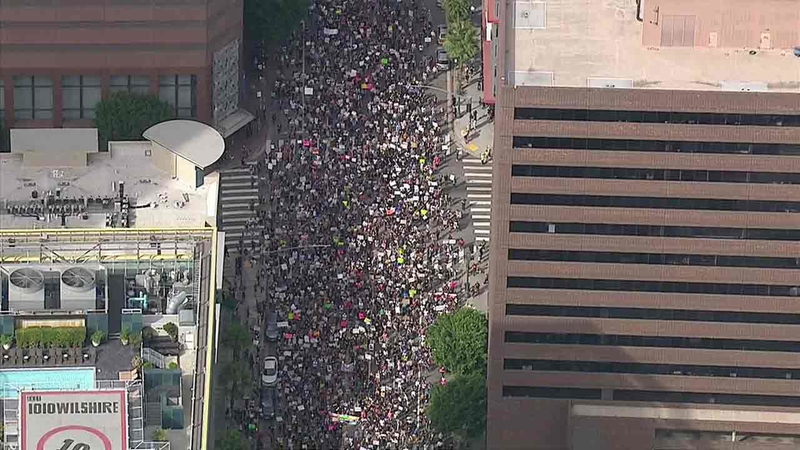 LOS ANGELES (KABC) -- About 8,000 demonstrators gathered to form the largest anti-Donald Trump rally to date in Los Angeles on Saturday, according to the Los Angeles Police Department.

The march began at about 10 a.m. in MacArthur Park and made its way to the Federal Building in downtown L.A for a rally.


Within the first 30 minutes, the river of demonstrators forced law enforcement to shut down several on-ramps and off-ramps on both sides of the 110 and 101 freeways in downtown.

The march was split into two dense groups, one which got stuck on 3rd Street in the heart of downtown L.A., as police tried to keep them away from the freeways.

Meantime, a large crowed that marched down Wilshire Boulevard stopped at the Federal Building. Demonstrators there rallied with speeches and many were heard chanting "not my president!" Others chanted "human rights."

"The energy here is just palpable," one protester said. "This is how history has always worked. If we didn't have protests there wouldn't be a civil rights movement. There wouldn't have been the 19th Amendment passed."

Others in the crowd said they were motivated by a sense of unity with like-minded people.

Authorities from the LAPD and other law enforcement agencies said although it's been the largest demonstration in the area so far, protesters have marched peacefully and respectfully.

Police urged anyone not participating in the protests to avoid all areas in downtown. Cars were seen stuck on surface streets as crowds walked along.

No arrests were made during the demonstration, authorities said.

About 195 people, eight of them juveniles, were arrested during a protest made up of about 1,000 demonstrators marching through downtown L.A. Friday night, according to the LAPD.

Marchers took off from Pershing Square, starting a miles-long march through the city.

The group made multiple attempts to get onto the 110 and 101 freeways but were blocked by authorities.

Caught in the act! #LAPD cars tagged as our cameras roll. The swift takedown as the crowd revolts - Now at 11p on ABC7 pic.twitter.com/gsvo1rUPZD