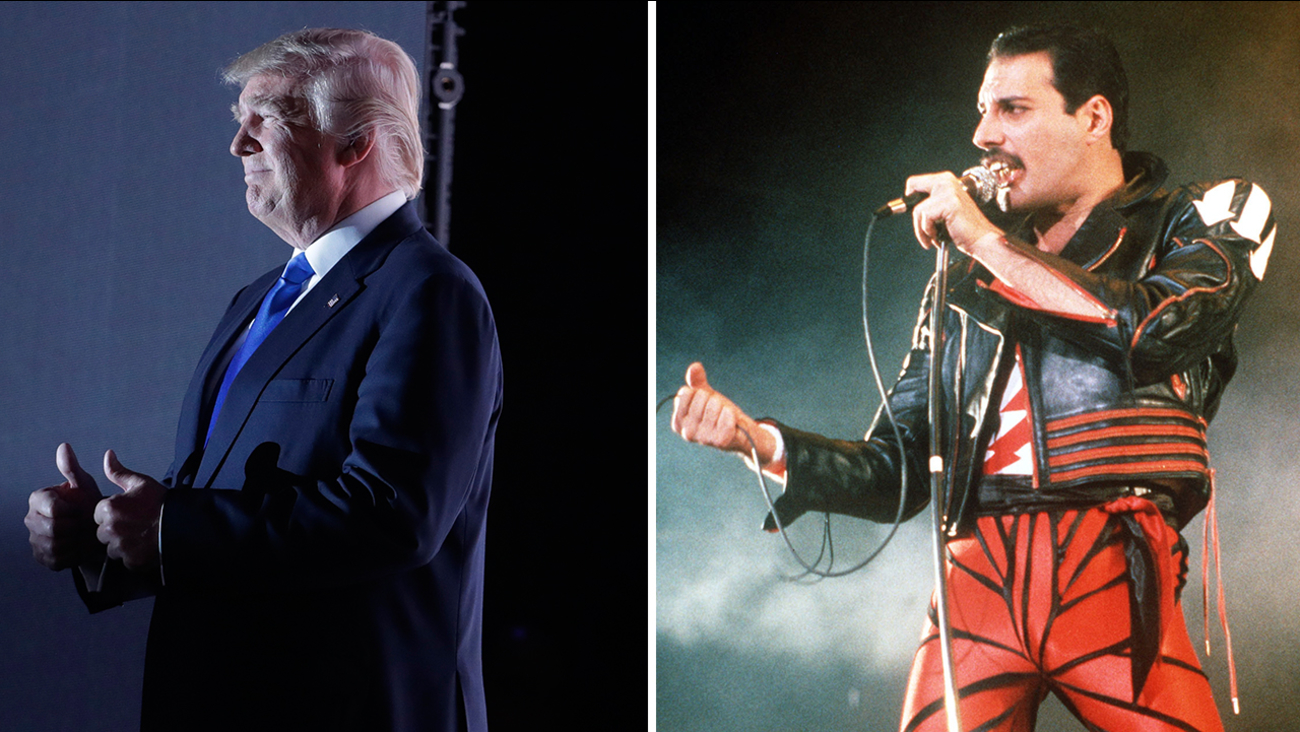 LEFT: Donald Trump on the first day of the RNC in Cleveland, July 18, 2016. RIGHT: Freddie Mercury of the rock group Queen, performs at a concert in Sydney, Australia, in 1985. (John Locher/AP | Gill Allen/AP)

Donald Trump is not a champion in the eyes of the rock group Queen after the band tweeted their disapproval over the Republican National Convention using their song to introduce the candidate on Monday.

Trump triumphantly walked onstage as the group's "We Are The Champions" played in the background.

Watch Donald Trump's grand entrance to "We are the Champions" at the RNC in Cleveland.

Queen disapproved of the usage of their song as Trump walked onstage, tweeting the following on Tuesday.

An unauthorised use at the Republican Convention against our wishes - Queen

Other notable figures also expressed their dismay over the use of "We Are The Champions" at the convention, criticizing the GOP for its treatment of LGBT citizens but still playing music from Queen, whose former lead singer Freddie Mercury passed away from AIDS in 1991 and remains a massive LGBT icon.

Trump has previously been criticized by Queen for using their song. On June 7, the anthem was played as Trump walked out to his victory party at the Trump National Golf Club in New York, according to ABC News. Brian May, guitarist for the band, shared a message on his website in response to the previous Trump incident, saying "it has always been against our policy to allow Queen music to be used as a campaigning tool."
Related topics:
politicsdonald trumprepublicansentertainmentpresidential racemusic2016 republican national convention rncnationalelections2016 electionu.s. & world
Copyright © 2022 KABC Television, LLC. All rights reserved.
TOP STORIES
Blink-182's Travis Barker reportedly hospitalized in LA
Father, 10-year-old son found dead next to car in Chatsworth
Trump WH attorney disputes Hutchinson testimony about handwritten note
Shooting suspect barricaded inside South LA apartment complex
Workers fired for not joining company's daily Christian prayer: EEOC
R. Kelly due in court for sex abuse sentencing in NYC
Source of mysterious lights over San Diego identified
Show More
FTC sues Walmart over scammers' use of money transfer services
After 18-month-old dies in hot car, dad dies by apparent suicide: P...
Giuliani associate to be sentenced for violating campaign finance laws
Biden administration plans to send out thousands of monkeypox vaccines
Migrants in search of a better life continue to die on their journeys
More TOP STORIES News