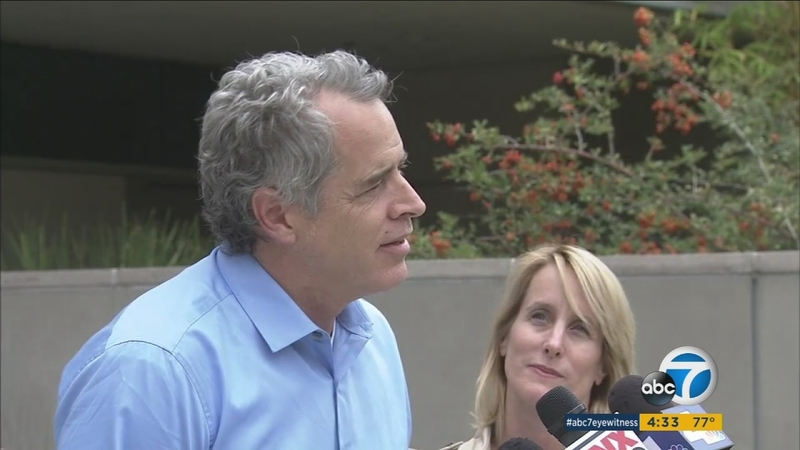 HOLLYWOOD, LOS ANGELES (KABC) -- The man who vandalized Donald Trump's star on the Hollywood Walk of Fame said he has no regrets, even though the act resulted in his arrest on felony vandalism charges.

James Otis, who said he is an heir to the Otis Elevator family and his great-grandfather invented Listerine, spoke to the media after his release on bail.

"I'm not at all ashamed of what I've done," Otis said, speaking with his attorney by his side. "What Mr. Trump has done is he's derailed the entire election. I got so upset. I got so frustrated and angry and that's why I did this."

Otis originally planned to auction off the brass nameplate he removed from the sidewalk and give the money to the women that Trump has allegedly sexually assaulted. He thought the Hollywood Walk of Fame would allow him to keep the piece because it was damaged, but they said no and he returned it Thursday morning.

"I admitted my mistakes," Otis said. "And I'm now dealing with my consequences. Unlike Mr. Trump who has never admitted what he's done."

Otis was arrested early Thursday in connection the vandalism of Trump's star on the Hollywood Walk of Fame,

He was taken into custody without incident and was booked on felony vandalism at the Men's Central Jail in downtown, according to the LAPD.

Otis donned a construction hat and vest and placed barriers around the sidewalk to make it appear as if he was a construction worker, and used a sledgehammer and pickax to destroy the star.

According to several witnesses, the incident began at about 6 a.m. and did not initially seem unusual.

The suspect who vandalized the Hollywood #WOFStar belonging to Donald Trump has been arrested. Detectives are handling. Press Release coming pic.twitter.com/bSoUSbDjk2

Leron Gubler, president of the Hollywood Chamber of Commerce, which maintains the Walk of Fame, later released a statement regarding the matter:

"Once we deem it's ready, they'll come back and polish the star," Gubler said. "It will look as good as new."