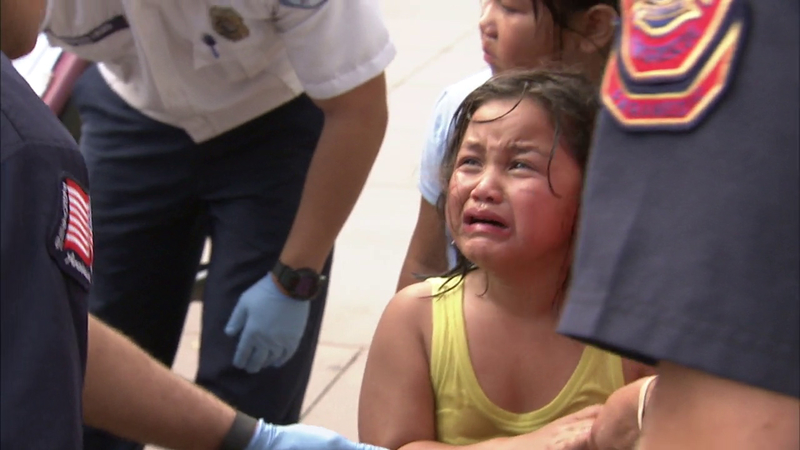 ANAHEIM, Calif. (KABC) -- Things got ugly between Donald Trump supporters and protesters in front of Anaheim City Hall on Tuesday.

Officials said a skirmish ensued and several Trump supporters were sprayed with a chemical, including two young girls.

"Somebody sprayed me, some idiot sprayed me with some kind of spray in my eyes, my face," Paul Rodriquez Jr., a Trump supporter, said. "Could have been mace, it was some kind of chemical."

The clash was caused by a proposal under consideration in the city council to condemn Trump's statements on immigrants and minorities.

"More than 50 percent of our population is Latino in the city of Anaheim. We have a very significant refugee and immigrant population, a very large Muslim population, and these individuals have been hurt by that level of rhetoric and there's just no call for it," Anaheim Councilmember Kris Murray said.

The motion brought out both those for and against Trump to Friendship Plaza in front of city hall.

"We as Trump supporters are here to send the message that we think this is incorrect, we do not believe that a city council should be entering into Federal issues to begin with," Robin Hvidston, a Trump supporter, said.

Some were concerned the council may not legally be allowed to take a stance on individual candidates in Federal elections.

"I don't think we should be doing this at all," Anaheim Mayor Tom Tait said. "Our job here is really about fixing potholes and making sure people are safe, police and fire protection. We ought not be weighing in on political matters. At the very least it's inappropriate, possibly illegal."