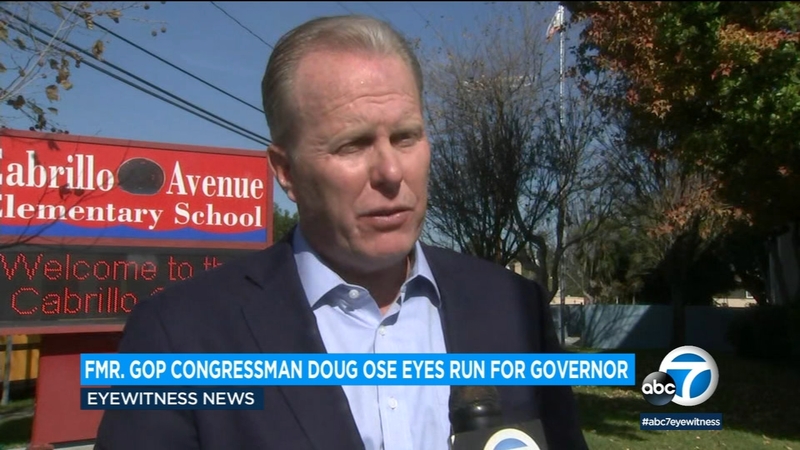 LOS ANGELES (KABC) -- Former Republican congressman Doug Ose said Wednesday he is considering entering a possible recall election aimed at Gov. Gavin Newsom, raising the possibility of another Republican joining a contest that could oust the Democratic governor from office.

In an interview, Ose said voters are clamoring for new leadership after Newsom's wobbly COVID-19 vaccine rollout and long-running coronavirus rules that have shuttered businesses and public schools.

"I know I can do a better job than Newsom is doing," Ose said. "Anybody running needs to talk about issues that matter around the kitchen table."

A petition to recall Gov. Gavin Newsom is gaining steam, but why are people upset with him? Here are some of the reasons people want to recall the California governor.

Supporters of a possible recall election are continuing to gather petition signatures needed to qualify the proposal for the ballot. They have until mid-March to hit a required threshold of nearly 1.5 million signatures, and organizers say they have over 1.3 million so far.

If Ose decides to become a candidate, he said he will run in the recall if it qualifies or, if it doesn't, challenge Newsom when he is expected to seek a second term in 2022.

Ose, a businessman from the Sacramento region, served in Congress from 1999 to January 2005. He has recently tweeted in support of the recall, as well as urging schools to reopen.

In the year since California saw its first coronavirus case, Democratic Gov. Gavin Newsom has gone from a governor in command to one lurching from one political crisis to the next.

He would join a growing field of Republicans hoping to replace Newsom in Sacramento.

Ose, a political moderate, briefly ran for governor in 2018 before dropping out of the race, citing a lack of funding.

Former San Diego Mayor Kevin Faulconer has officially jumped into the 2022 gubernatorial race. At his announcement in Los Angeles, the moderate Republican stood outside two schools and went after Gavin Newsom's handling of the pandemic.