'Downton Abbey' moves into 'A New Era' with a French villa, a Hollywood movie, and Maggie Smith 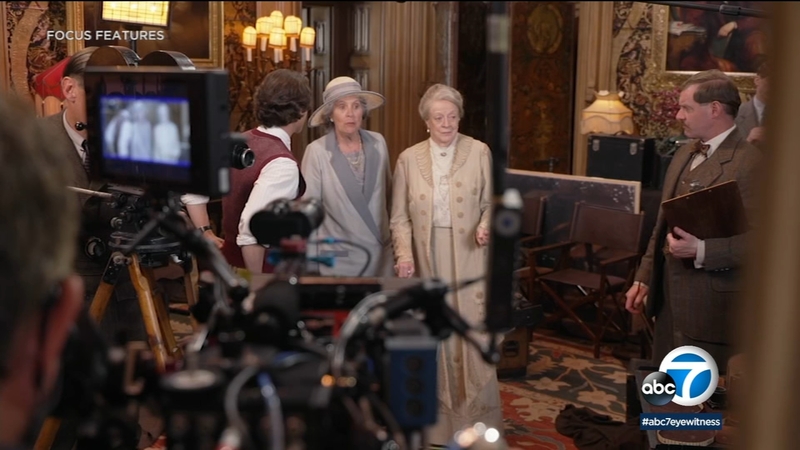 HOLLYWOOD -- After six seasons on television, and one big screen venture, the Emmy Award-winning show "Downton Abbey" and its "upstairs-downstairs" extended Grantham family are back.

We see two stories play out in "Downton Abbey: A New Era."

One sees part of the family welcoming a film crew to the stately home.

It's a business deal that paid the family a lot of money so the crew could use the place as the set for a silent movie.

At the same time, Dame Maggie Smith's character, the Dowager Countess, inherits a villa on the French Riviera.

She has been gifted the mansion from a mysterious former acquaintance.

That lets another part of the family - and the actors playing those roles - take an emotional, extended vacation in France.

"Thankfully, it wasn't movie magic, it was a bit of luck for our characters," said Allen Leech, who plays Tom Branson. So we did get to go. It was at a time when we felt very lucky, because no one was really allowed to travel. It was the height of the pandemic, and we felt very blessed to go and do that."

Laura Carmichael, who plays Lady Edith, said the experience - and country - was as gorgeous as it is on screen.

"We were quarantined together before for about a week, so it was pretty great," she said. "It was like being on holiday with your film mates. It felt like a holiday camp."

Leech joked, "Or an old folks home! Because you sit around, and someone would say, 'I think it's lunch time! Is it a buffet?'"

Being part of the Dowager countess' storyline meant Leech and Carmichael had the opportunity to, once again, work with Smith.

It's a privilege, they say, never gets old.

"She is the best," said Leech. "I think you get a bit complacent when you work with her for six years. Then when you have time away, you come back, and you watch her work, it takes your breath away. She is so fantastic."