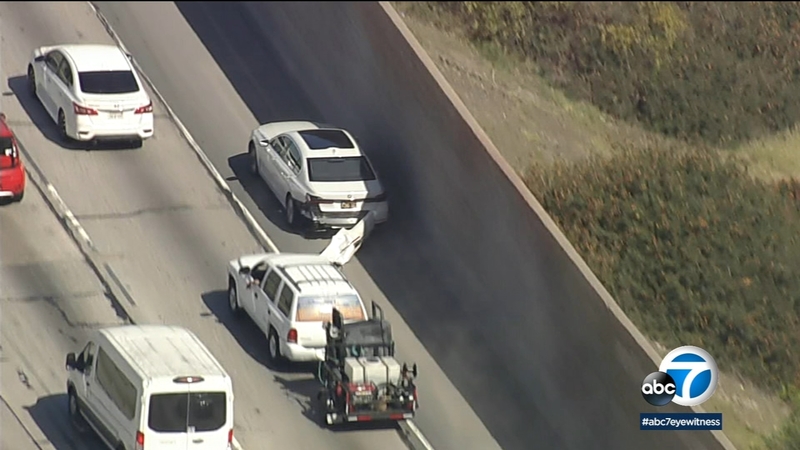 Suspect reaches speeds of 100 mph during chase through LA County

WHITTIER, Calif. (KABC) -- The driver of a stolen car was taken into custody on Thursday morning after leading multiple law-enforcement agencies on a high-speed chase that made its way from downtown Los Angeles to Whittier, authorities said.

The California Highway Patrol initiated the pursuit, which saw the suspect repeatedly weaving in and out of oncoming traffic on surface streets while trying to evade capture. Meanwhile the rear bumper was hanging off and dragging behind the white four-door sedan, a BMW 7 series model.

Other agencies intermittently took over the chase as it made its way across multiple jurisdictions, reaching speeds of up to 100 mph. Patrol vehicles later disengaged, possibly out of concern for the public's safety due to the suspect's speed and erratic maneuvers. At least one police airship continued following overhead.

The driver of a stolen car was taken into custody after leading multiple law-enforcement agencies on a high-speed chase that made its way from Compton to Whittier, authorities said.

The driver ended up in Whittier. At one intersection, the suspect came dangerously close to a woman pushing a stroller, and at another intersection, he nearly colliding with a minivan and a patrol vehicle.

Shortly before 1 p.m., the male driver stopped the vehicle at an intersection and attempted to flee on foot. Los Angeles County sheriff's deputies gave chase on foot and apprehended suspect. He was handcuffed, and placed into an LASD vehicle without incident.

Want to stream this chase right on your TV? Search "ABC7 Los Angeles" on your streaming device and download our free app - learn more here.