KABC
By Leticia Juarez
RIALTO, Calif. (KABC) -- Days after a hit-and-run crash left an innocent motorist's car pinned under a moving big rig on the 10 Freeway in Rialto, the sedan's driver recounted the harrowing incident.

In an interview with ABC7, Madis Tolentino said she was on her way home Wednesday when she noticed two cars approaching hers from behind at high speeds. Another vehicle's dashcam video shows Tolentino's sedan being sideswiped by one of the speeding cars, a gray Infiniti. The momentum from the impact then resulted in a collision between the victim's BMW and a nearby semi truck.

Tolentino said she believed the two other cars were racing at the time of the incident.

The Infiniti sped away, almost hitting a vehicle that appeared to be a Nissan Altima or green Mazda, which pulled over to the side of the road before also leaving the scene.

The good Samaritan who captured the collision on video ran to help Tolentino, who was able to get out of her pinned car with a few minor scrapes and bruises.

She said her first instinct was to walk as far away from the wreckage as possible, "and then that's when the truck driver came out, and he met me and just really hugged me."

The Infiniti, whose airbag deployed, sustained driver's side damage. Its driver was being sought by authorities on Friday.

The San Bernardino CHP is asking anyone with information to come forward.

Tolentino's son posted the video of the incident to Facebook in hopes of garnering some leads. The video has since gone viral.

Tolentino said she is grateful to the many good Samaritans who pulled over and offered their help.
Report a correction or typo
Related topics:
fontanacoltonrialtosan bernardino countycar crashreckless drivingdashcam video
Copyright © 2020 KABC-TV. All Rights Reserved.
RELATED 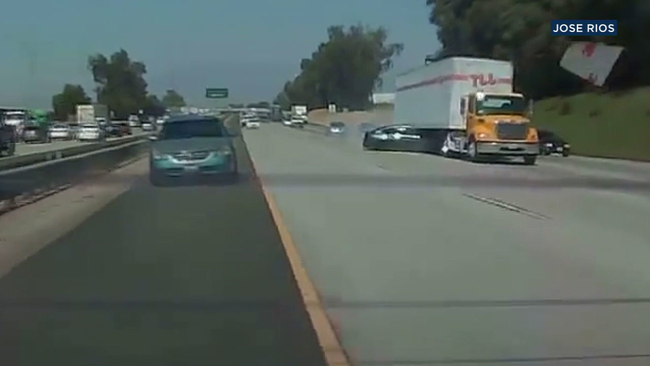