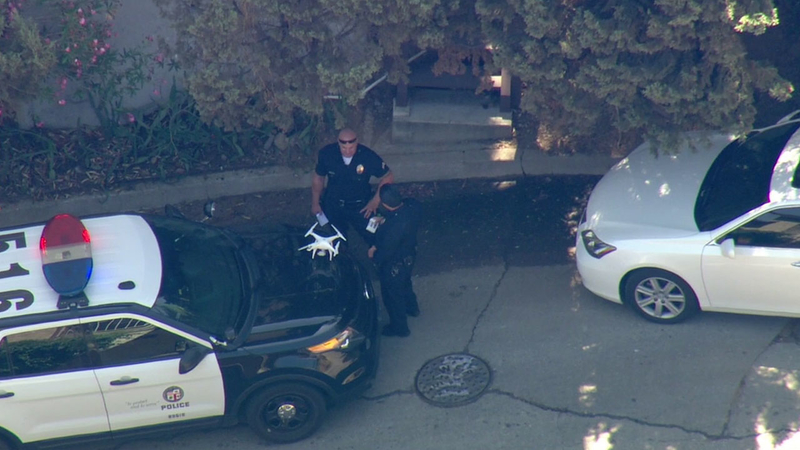 Around 10:30 a.m., a small brush fire was reported along the eastbound 134 Freeway near the 7500 block of North Figueroa Street. Three lanes on the eastbound side were temporarily closed as firefighters knocked down the blaze within 40 minutes.

Los Angeles police officers were then sent to the 1500 block of Loleta Avenue to help the fire department find a possible drone.

"You fly - we can't. So because of that drone that was identified by one of our ground resources, all of our air assets were grounded for the duration of this incident," Los Angeles Fire Deputy Chief Phillip Fligiel said.

Firefighters work on cleaning up a brush fire along the eastbound 134 Freeway in Eagle Rock on Wednesday, July 27, 2016.

A resident in the area reportedly found the drone a short time later and called police. He told them it was not his and it had landed in front of his home on the porch. Police took the drone into their possession and left the area.

Authorities were still searching for the owner and operator of the drone.

"With drones in the sky, it imposes an extreme hazard for our air operations. Once they're drones in the sky, our aircraft cannot be in that area. A mid-air collision with one of our aircraft and a drone could be extremely hazardous for our pilots and also our firefighters on the ground," Justin Correll with the U.S. Forest Service said.

Assemblyman Mike Gato is trying again to pass a bill calling for stricter rules for drones, including requiring all drones sold in California to have GPS shut off if they get too close to an airport or fire.