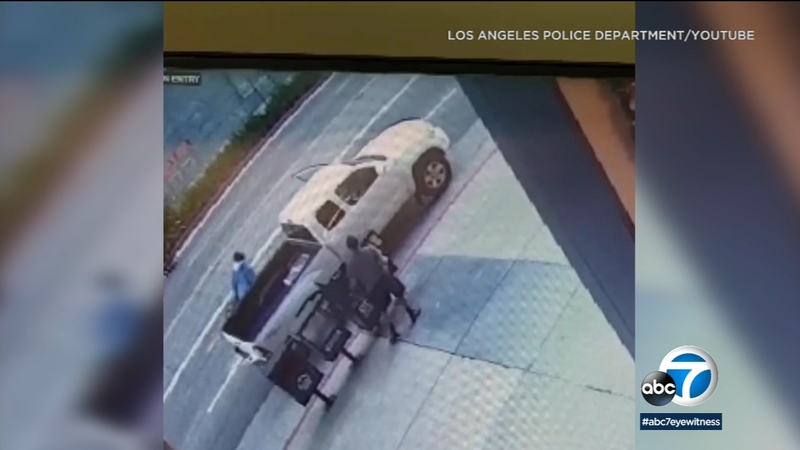 DOWNTOWN LOS ANGELES (KABC) -- Police have released new video in their search for a carjacking suspect accused in a deadly crime spree through downtown Los Angeles over the weekend.

In new surveillance video released by the Los Angeles Police Department on Sunday, the suspect is seen approaching a newspaper delivery driver in the 900 block of Wilshire Boulevard. The man then runs around to steal the truck and speeds away.

The delivery man had hopped onto the bed of the truck to try and stop the suspect. He eventually tumbled off the moving vehicle a few blocks away and only suffered mild injuries.

The carjacking suspect eventually made his way to the area of 7th and Olive streets where he hit a cyclist from behind, killing the 46-year-old man, before crashing into some cars.

Authorities are searching for a suspected hit-and-run driver who left a bicyclist to die in the street in downtown Los Angeles after he had allegedly carjacked the vehicle from a newspaper delivery man just a short while before.

The victim, Branden Finley, was on his way to meet friends for a morning bike ride when he was struck. He was pronounced dead at the scene.

Family and friends gathered with candles and flowers Saturday night to mourn the father of two.

"I still don't even think it's real. I feel like it's a dream. Right now, it's a nightmare and I feel tomorrow I'm going to wake up and this day will never exist," said his daughter, Koi Finley.

As the LAPD continues to search for the suspect, Finley's family is hoping the public will be able to help put the suspect behind bars.

Detectives say the suspect was seen barefoot, signifying that he may be homeless.