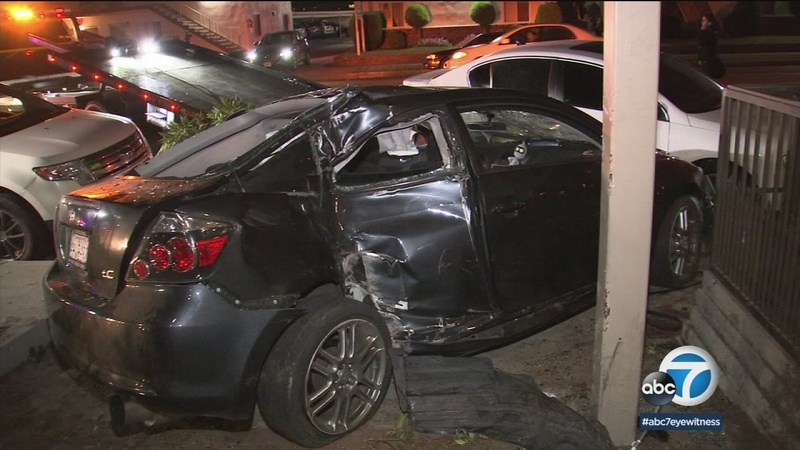 BELLFLOWER, Calif. (KABC) -- A suspected drunk driver and four pedestrians were injured in a violent crash that occurred as nearby bars were closing early Friday morning in Bellflower, authorities said.

According to a Los Angeles County Fire Department spokesperson, a caller reported the collision at 2:09 a.m. near the intersection of Woodruff Avenue and Foster Road.

Witnesses said four bar patrons -- a man and three women -- were standing on a sidewalk when a vehicle jumped a curb and struck them along with two parked cars. The force of the impact pushed one of the cars into the street.

Four pedestrians were standing on the sidewalk in Bellflower after the bar they were at closed — and were hit by a vehicle that jumped the curb. They’ve been taken to the hospital. Driver also at a local hospital. Live report next at 5:00am @ABC7 pic.twitter.com/W6KeCQyY8M

"He revved the engine up, just to show off the engine to everyone in front of the club," a witness, who gave his name only as Mark, said of the driver. "Burning rubber, skidding across the intersection ... and then a second later, boom!"

The victims and the driver were transported to a hospital with injuries that were described as non-life-threatening.

Sheriff's deputies were unable to administer a field sobriety test at the scene, due to the suspect's injuries, but intended to do so after he was treated at the hospital.