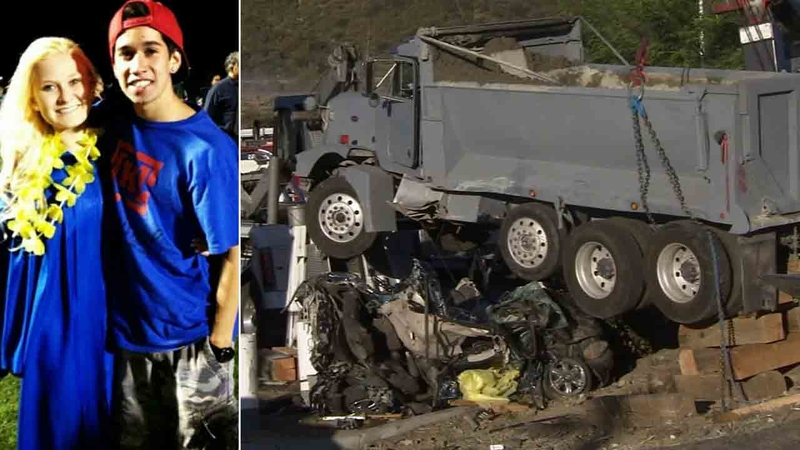 CAJON PASS (KABC) -- A cement truck barreled out of control and landed on top of a vehicle in the Cajon Pass Tuesday night, killing two people inside the vehicle and injuring three others.

The crash happened around 11:30 p.m. at the 15 Freeway near the Highway 138 exit. The truck carrying wet cement was leaving a Caltrans construction site when it lost control for an unknown reason and failed to stop at an intersection.

The truck crashed into a PT Cruiser heading westbound on Highway 138. The PT Cruiser was pushed into a drainage ditch and smashed into barriers outside a gas station. The truck ended up on top of the PT Cruiser. It took firefighters several hours to extricate the victims, CHP Officer Ryan Dallin said.

Officials say five young people, including at least one minor, were inside the car at the time. Two people were pronounced dead at the scene, including the driver, 18-year-old Nicole Brittney Lyle, who they say just graduated from Serrano High School in Phelan, and 16-year-old John Anthony Cabrera Jr., who attended the same school.

"It's too much to describe. They're both amazing people. It's like losing a little brother... He's the funniest little kid, and Nicole was so awesome, just happy all the time," Adam Brown, a friend of the victims, said.

Brown says he had just said goodbye to Cabrera, who was on a late night trip to the beach.

Three other victims were taken to the hospital with major injuries. They were identified as Michael Baker, 20, Shane Gretzner, 19, and David Castaneda, whose age was unknown. Details on their conditions were not immediately released.

A vigil was scheduled in honor of the victims at Serrano High School at 7 p.m. Wednesday.

The truck driver, Sonja Aida, 54, was not injured in the crash.

"This is a tragic, tragic event for Caltrans and the construction community," Caltrans spokeswoman Joy Sepulveda said. "Our subcontractor working on the I-15 paving project in the Cajon Pass was involved, and we're just saddened. Our hearts go out to the families."

Greg Reiss of Phelan says his two kids were friends with the victims who were killed in the crash. He says his kids received the tragic news Wednesday morning.

"They're heartbroken right now, you know, because they've known these kids their whole lives," Reiss said.

"Right now, they're investigating whether it may have been a mechanical issue or not. The truck was unable to stop at the stop sign," California Highway Patrol Sgt. Ed Casillas said.

There have been numerous crashes in the exact area where the fatal collision occurred over the years, according to local residents. In hopes of preventing more collisions, residents say pylons were installed.