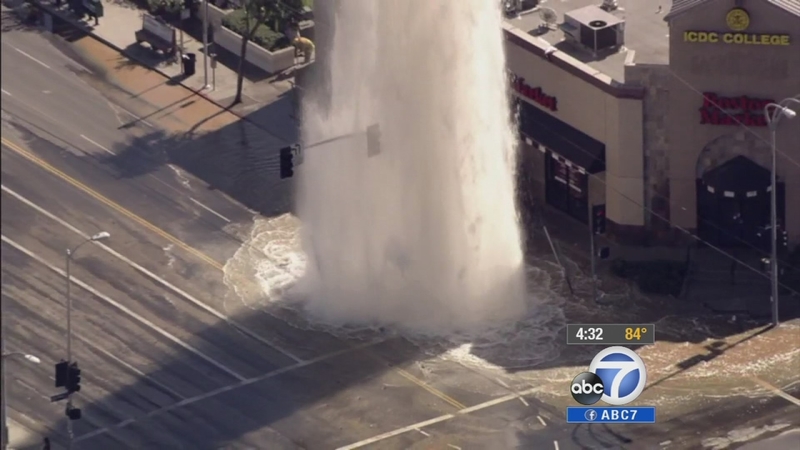 LOS ANGELES (KABC) -- The water main break in Encino Monday was just the latest in what has become a common sight in Los Angeles. So are engineers making any headway in reducing the number of breaks?

As spectacular as what you might see on the Las Vegas strip, thousands of gallons of water shot skyward in 2009. But no, it was not a show. Like many now infamous blowouts, it was a display of what happens as 7,200 miles of L.A.'s pipelines get older.

Another factor that might have contributed to the water main break in Encino: the weather.

"Just like anything else, water pipes expand when it's hot and that expansion puts tension in the system," said Julie Spacht of DWP.

A series of days with temperatures in the 90s can be the tipping point for fragile pipes. DWP says, however, its strategy for identifying potential hotspots has improved dramatically over the last seven years. It reports a 37 percent drop in pipe leaks and breaks.

Part of the solution, according to L.A. Mayor Eric Garcetti, is funding.

"If you take, for instance, the valves that were busting and breaking just a few years ago, we've started spending more than 40 percent more on them each year, and we've brought down the number that are failing from over 40 percent to less than 10 percent, so we're seeing a lot of progress," Garcetti said.

DWP employs a strategy for replacing pipe, evaluating several factors to assess its risk of failure, starting with the soil that surrounds the pipe.

In 2009, engineers went deeper to figure out why there was a sudden spike in breaches, 43 that September double the same period the previous year.

The study found that it was a drought year, that there were water restrictions, and that the uneven usage was taxing to the system. Since then, DWP has replaced 100 miles of pipe, and the breaches have reduced from 1,700 to 1,100.

"We believe that that's a validation of our replacement programs and that we're picking the right pipe," Spacht said.

DWP urged customers to report any sign of suspicious water activity in their neighborhoods by calling 1 800-DIAL-DWP.