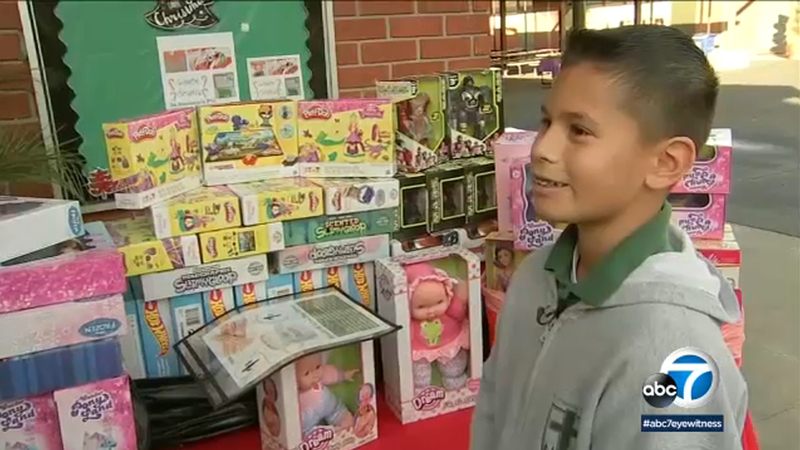 EAGLE ROCK, LOS ANGELES (KABC) -- An Eagle Rock fourth-grader is making the holidays much brighter for kids in need. He bought nearly 100 toys with money made from selling churros.

"My parents told me that there was a lot of kids that were needy and didn't have a lot of toys to open so I realized that I should have donated so then I started donating," said Sebastian Salmeron.

The 9-year-old lives near fire station 55 in Eagle Rock which triggered his involvement in ABC7's Spark of Love toy drive a few years back. He's donated his allowance in the past, but this year, Sebastian decided to set a higher goal with the support of his classmates at St. Dominic School.

"He came to me and said I want to do something more. I know that I don't have that much in my allowance but I want to give more, how can we give more? The idea came up of fundraising and he said, what about churros," said Lupe Salmeron, Sebastian's mom.

Sebastian sold the churros at school. The sweet treats came from his family's favorite bakery, Luceros in Maywood. Another parent donated hot chocolate, and Sebastian ran out of churros in 25 minutes. In all, he raised $400, and he was able to buy 98 toys.

"It's so inspiring and part of Christmas is sharing gifts. This young child with the act of giving, but not expecting to get anything," said Jaime Lesinski, a battalion chief with the LAFD.

"Filled with joy because it feels good giving back, because what if I was that person who didn't have anything," Sebastian said.