Millions of Americans began digging out Sunday from a mammoth blizzard that set a new single-day snowfall record in Washington and New York City.

NEW YORK -- Millions of Americans began digging out Sunday from a mammoth blizzard that set a new single-day snowfall record in Washington and New York City. The hurricane-force winds and whiteout conditions gave way to blinding sunshine and temperatures slightly above freezing, promising a gentle thawing-out.

The timing could not have been better for East Coast states: The heaviest snow began falling Friday evening, and tapered off just before midnight Saturday. Millions heeded calls to stay home, enabling road crews to clear snow and ice.

New York and Baltimore began lifting travel restrictions and hearty souls ventured out on snow-choked streets, while mass transit systems up and down the coast gradually restored normal service.

Crews were working to restore power in places around the region and flooding remained a problem along the coast, but as predicted, the impact was nothing like Superstorm Sandy.

The massive snowstorm brought both the nation's capital and its largest city to a stop, dumping as much as 3 feet of snow and stranding tens of thousands of travelers. At least 18 deaths were blamed on the weather, resulting from car crashes, shoveling snow and hypothermia.

The storm dropped snow from the Gulf Coast to New England, with areas of Washington surpassing 30 inches. The heaviest official report was 42 inches, in Glengary, West Virginia.

In Washington, monuments that would typically be busy with tourists stood vacant. All mass transit in the capital was shut down through Sunday. In northern Virginia, plow trucks outnumbered passenger vehicles on the streets Sunday

Chris Courtney, an investment adviser from Fairfax Station, called ahead to confirm he could complete his usual Sunday routine: a coffee and a newspaper.

"I wanted to give them business," said Courtney, 61. "I've got to believe they worked all night, the plow drivers."

Travel conditions were improving from the dangerously snowy, icy roads that led to crashes that killed several people Friday and Saturday. Those killed included a 4-year-old boy in North Carolina; a Kentucky transportation worker who was plowing highways; and a woman whose car plunged down a 300-foot embankment in Tennessee. Three people died while shoveling snow in Queens and Staten Island.

An Ohio teenager sledding behind an all-terrain vehicle was hit by a truck and killed, and two people died of hypothermia in southwest Virginia. In North Carolina, a man whose car had veered off an icy-covered road was arrested on charges of killing one of three men who stopped to help.

In Kentucky, Pennsylvania and West Virginia, drivers were marooned for hours on snow-choked highways. Roofs collapsed on a historic theater in Virginia and a horse barn in Maryland.

The snow was whipped into a maelstrom by winds that reached 75 mph at Dewey Beach, Delaware, and Langley Air Force Base, Virginia, the weather service said. From Virginia to New York, sustained winds topped 30 mph and gusted to around 50 mph. And if that weren't enough, the storm also had bursts of thunder and lightning. 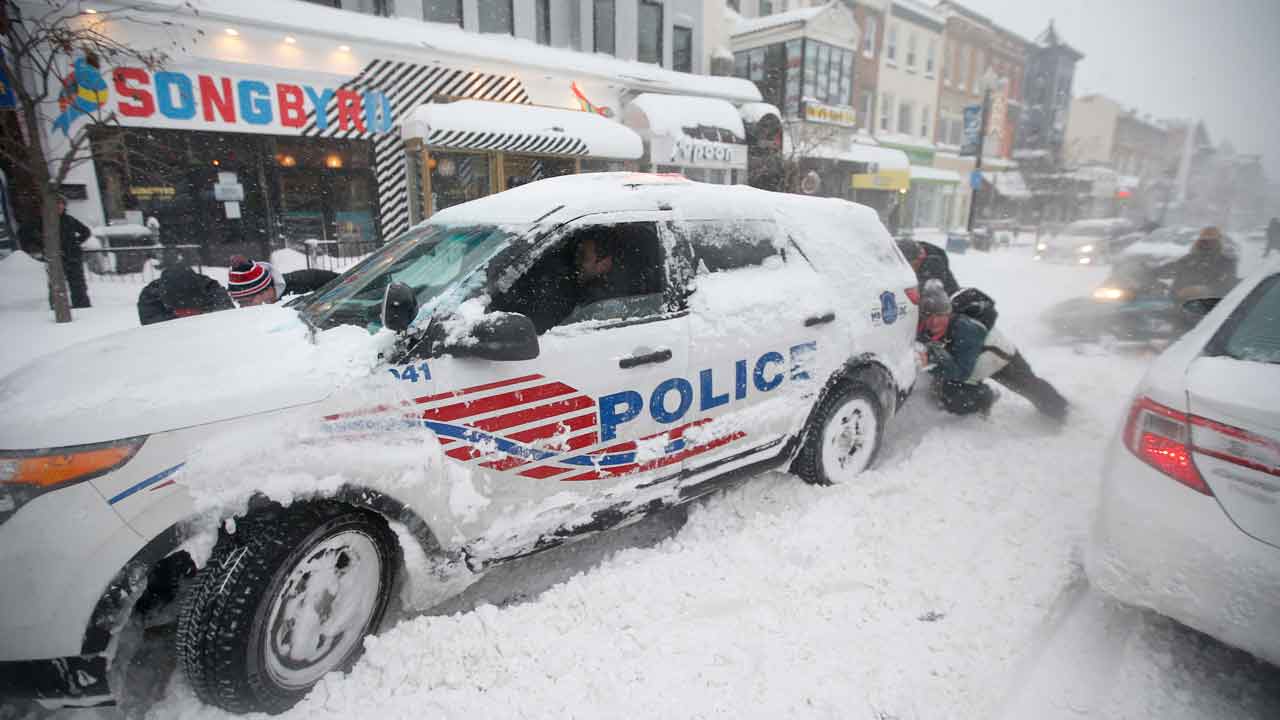