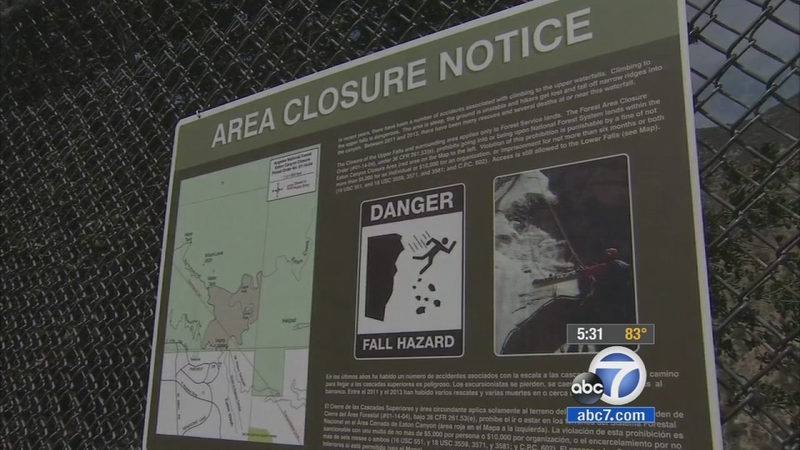 PASADENA, Calif. (KABC) -- A woman had to be rescued Wednesday, the same day U.S. Forest officials announced they are closing the first waterfall above Eaton Canyon to the public on Friday.

The woman was climbing down the hill when she lost her footing and slid for a few feet before a tree stopped her fall Wednesday. She was hanging on the ledge about 50 feet above the canyon bottom until the L.A. County Search and Rescue Team hoisted her to safety.

Officials say the climb to the upper waterfall is steep and dangerous, covered with crumbling walks.

The closure will impact a small part of the upper canyon. Signs have been posted showing the restricted area and advising violators about potential fines. Anyone caught in the off-limits area will be subject to fines of up to $5,000 and/or six months in jail.

Five hikers have died in recent years, and thousands of taxpayer dollars were sent to rescue hikers in 2013. There were more than 60 rescues in the canyon's upper falls area in 2012.

Those rescues pose a risk to hikers and emergency personnel.

"We have to go up there, fly helicopters, which is dangerous in and of itself, and then deliver our rescuers down from a tight rope, down to where you're hanging off and they have to try and grab you and pull you off, so they're risking their lives going up there as well," Judy said.

The hiker-created trail to the lower waterfalls will remain open.