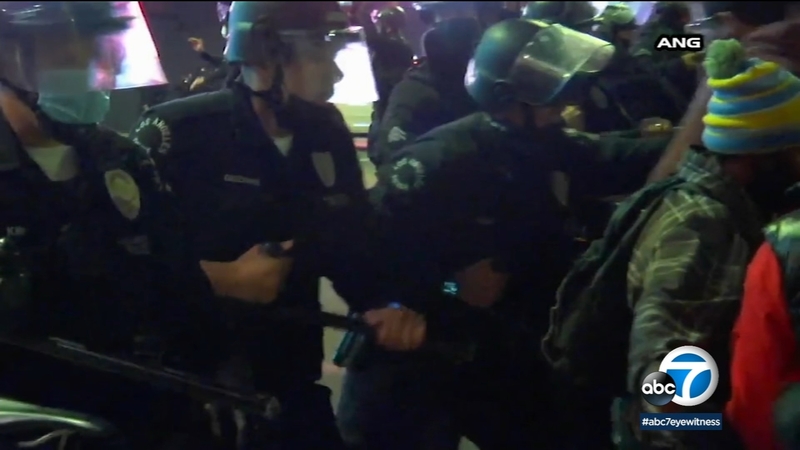 DOWNTOWN LOS ANGELES (KABC) -- Advocates for the homeless on Tuesday rallied outside of Los Angeles City Hall, where they decried the clearing of encampments at Echo Park Lake last week.

Tuesday's demonstration was held days after Los Angeles Police Department officers clashed with demonstrators who protested against the removal of those who were living at the park.

The city operation was conducted ahead of a planned $500,000 cleanup project.

On one night last week, more than 180 people were arrested including multiple journalists who were reporting on the chaotic confrontations at the scene. The immediate area surrounding the lake was later cleared and fenced off.

Outside City Hall on Tuesday, some of those who were removed from the area were joined by vocal supporters.

"We're not vermin, we're not scum, we're human. We are human beings - working human beings," Jessica Mendez, one of the speakers at the rally. "Yes, there's problems in every country, in every community, in every gender - in every civilization that we have and we know, there will be problems."

"We made significant progress (Thursday) toward our goal of housing everyone at the park and moved an additional 32 unhoused individuals into transitional housing,'' O'Farrell said in a statement last week. "Almost 200 of the park's unhoused population has accepted and been placed in shelter options through Project Roomkey, Project Homekey, A Bridge Home and winter shelter.''