KABC
By ABC7.com staff
STUDIO CITY, LOS ANGELES (KABC) -- A former Miami Dolphins player was questioned in connection to a social media post that prompted classes to be canceled at Harvard-Westlake School on Friday.

The photo on his private but verified Instagram account featured a shotgun on a bed surrounded by shells with the caption "When you're a bully victim & a coward, your options are suicide or revenge".

The post also tagged four accounts, including those belonging to former Miami Dolphins teammates Richie Incognito and Mike Pouncey, according to ESPN.

Police are investigating if Martin created the post or if it was the work of hackers.

The social media post came to light Thursday evening and prompted the campus closure "out of an abundance of caution, and because the safety of our students, faculty, and staff is our top priority," the school said in a statement. "We are working closely with law enforcement and will share more information when we are able." 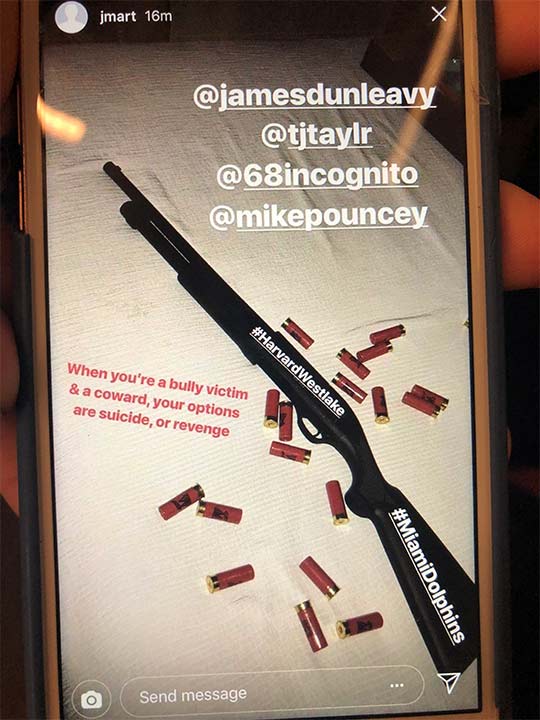 A 2008 Harvard-Westlake graduate, Martin made headlines in 2012 when he accused Incognito and Pouncey of severe bullying, resulting in Incognito being suspended for half the 2013 season.

Martin has since said in interviews that he suffers from depression and has attempted suicide in the past. He has not played in the NFL since 2015.

A former Harvard-Westlake classmate who wished to remain anonymous said they were shocked by the photo, but added that Martin had talked about suicide in the past and has also previously used his social media accounts to post "disturbing" messages.
Report a correction or typo
Related topics:
educationlos angelesstudio citylos angeles countyhigh schoolschool threatsocial mediainstagramthreat
Copyright © 2021 KABC-TV. All Rights Reserved.
More Videos
From CNN Newsource affiliates
TOP STORIES