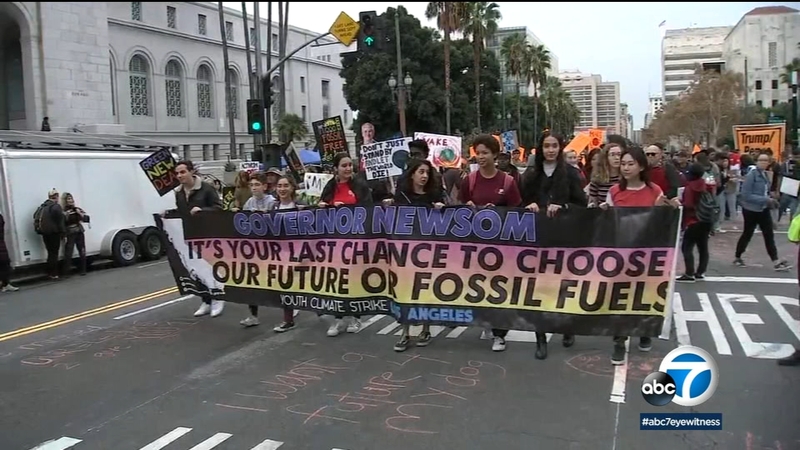 Climate strikes have taken place in the city once a month since September because students say this isn't a once-a-year issue.

Students protested inaction on climate change by politicians including Gov. Gavin Newsom, who they asked to halt oil and gas drilling in California.

Students at North Hollywood High School walked out of class at Friday morning to protest for an hour as passing cars honked to show support.

"I hope that they listen to the youth of today because we are the future and we are going to be demanding that change. We're going to be voting in the next few years. If they want our vote, they better listen to our demands to protect the environment and protect our planet," said Julian Bertet, a North Hollywood High School senior.

Outside city hall, a few hundred protesters rallied in the rain with signs and marched to the Los Angeles Department of Water and Power building. The Youth Climate Movement is angry that back in September, the U.N. Climate Summit in New York failed to deliver new commitments to cut emissions by the world's biggest countries.

"A lot of politicians try and blame it on other people or put it off for someone else to do. But, the only way this crisis can be solved is with all of them working together," said youth climate activist Chandini Brennan-Agarwal.

At Pasadena City Hall, students from Sequoyah School and community members called on their city council to stop supporting the fossil fuel industry.