KABC
ORANGE, Calif. (KABC) -- It's the second day of a three-day strike at multiple University of California medical locations.

At the UCI Medical Center in Orange, registered nurses joined their union coworkers in a sympathy strike to address pay inequalities and demand higher wages.

"It's wonderful to see the support of our auxiliary staff - they're fighting for their rights and we're here to help them," Gail Caro said.

Caro, a registered nurse, is one of many who joined the picket line in support of service workers.

The strikes are happening statewide and they're happening at the UC's five major medical centers and 10 university campuses.

"After a whole year at the bargaining table, they have refused to listen to our demands and we think that this is the only way that they're going to listen to us," Monica de Leon said.

De Leon is a vice president at AFSCME 3299. She said she's proud so many people are coming together to fight for change.

"It's 30 years in the making of having all these unions together. It's honestly a historical day for the UC family," she said.

In a statement, UC officials said they "strongly disagree with AFSCME's decision to strike, which will negatively impact patients, students and the UC community." The system is taking extra precautions to make sure patients aren't affected by the strike.

"We created a patient protection task force so we have workers that are ready to cross the line if needed in the case of an emergency. We provided those names and numbers to labor relations. They know we're only a phone call away," de Leon said.

The UC system said its workers are compensated at or above the market rate and refused its offer of a 3 percent annual increase for four years, plus health and retirement benefits.
Report a correction or typo
Related topics:
educationorangeorange countyucmoneyrace relationsstrikehealth carenurses
Copyright © 2020 KABC-TV. All Rights Reserved.
RELATED 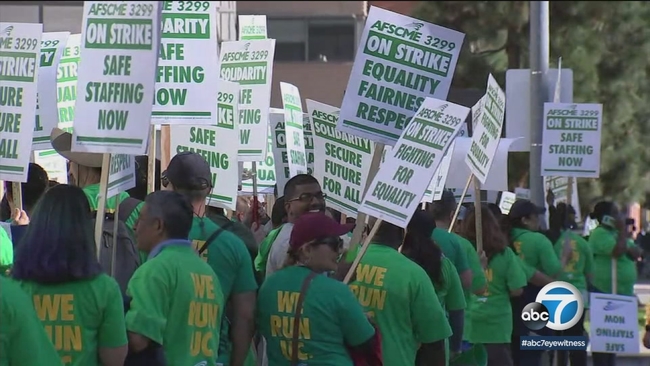