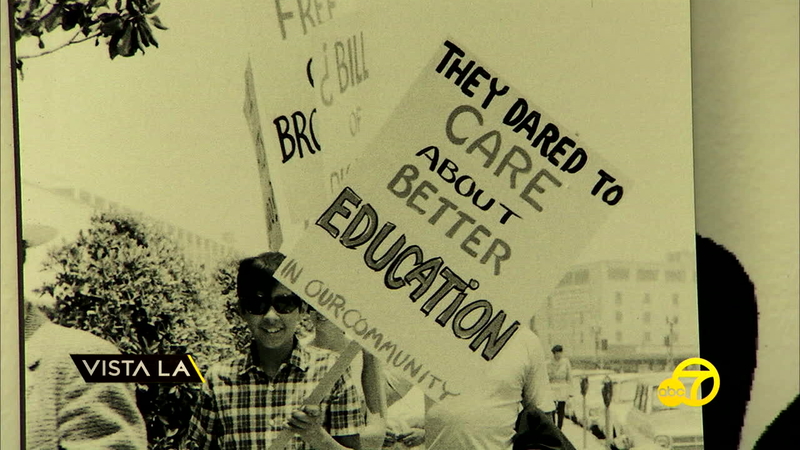 LOS ANGELES, CA (KABC) -- The East L.A. high school walkouts of March 1968 was a historical moment that opened the doors for Chicanos activists in the United States. The student-led protests are the focus of an exhibit at La Plaza de Cultura y Artes, a museum and cultural center which celebrates Mexican-American heritage.

"Historically, we had the United Farm Workers fighting for equality in the fields, strikes, but it was primarily a rural movement. Where this was the first time that the urban Chicanos came out and hit the streets," said Carlos Montes, a former Brown Beret and student leader of the movement.

"We had a high dropout rate. We had a racist curriculum, old books, old library, old buildings," said Montes. "Eventually the students did a survey and we came out with a list of demands focusing on demanding equality and respect as Mexican-Americans and including our history. We wanted bilingual education, ethnic studies, and Chicano teachers."

The 1968 walkouts received national attention and led to arrests of student protesters.

Moved by the La Plaza exhibit featuring this important moment in Chicano history, Montes said, "I remember opening day when I walked in. It was just exhilarating. We were so happy to see our history documented here. It was like reliving the 60's and reliving the walk outs."

He feels that student activism is still necessary. "It's very important that students today in the political climate and anti-immigrant hysteria take to the community to organize," said Montes. "I'm inspired by the current young generation that is taking to the street to demand their rights."