When a photographer approached 13-year-old Vidal Chastanet on the streets of New York and asked who has influenced him, Vidal thought of his principal.

"When we get in trouble, she doesn't suspend us," he said. "She calls us to her office and explains to us how society was built down around us. And she tells us that each time somebody fails out of school, a new jail cell gets built. And one time she made every student stand up, one at a time, and she told each one of us that we matter."

In a few short weeks, those words, posted to the Humans of New York blog, would go viral with more than 1 million likes. They would lead to a successful fund for the school...and an invitation to the White House.

"President Barack Obama wants to see us?" he said. "Oh my god, the president?"

When they first caught sight of each other, Lopez laughed with excitement. The president told the teen, "You look sharp, man."

Just as he was asked weeks earlier, Vidal asked the president about who has influenced him. Obama explained the impact his mother's hard work had on him.

"She had to work, she had to raise kids, it was a victory of her spirit," Obama said.

He added some advice for Vidal: When you are presented with role models, take advantage of it.

"Everybody always needs support. You'll have a lot of people supporting you out there. You just gotta make sure you seize those opportunities."

Lopez asked Obama about a time when he felt broken. The president explained how hopeless he felt at times when he first ran for Congress.

"There was a stretch of time at the age of 40 where I had invested a lot of time and effort and I wasn't sure I had taken the right path. And I think we all go through those stretches," he said.

The chance encounter on the street led to a much more long-lasting impact than the White House visit, too.

Stanton, inspired by Vidal's story and principal Lopez's leadership style, started a fund so students from Mott Hall Bridges Academy could tour Harvard. That fund has raised more than $1 million to establish an annual trip.

"Ms. Lopez taught me that before a student is ready for academic training, they must be made to understand that they deserve success. And that can be the hardest battle in education," read a post by Humans of New York.

It continued, explaining another significance behind the White House visit: "Ms. Lopez always said that there was no place her students did not belong. Recently we received an invitation that proved just that." 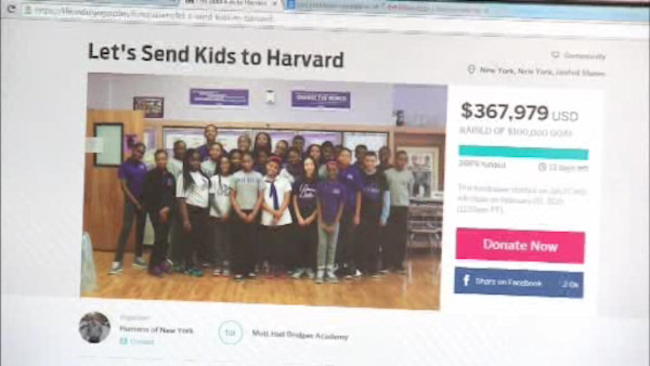