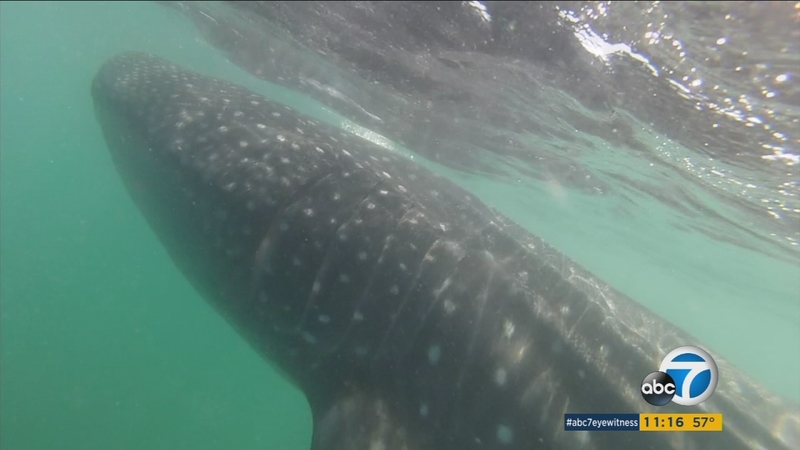 LONG BEACH, Calif. (KABC) -- El Nino is expected to have major effects on our weather this winter, but it's already churning up big changes off our coast.

Creatures seldom seen in Southern California are showing up, but are they here to stay?

"The whale shark is actually a shark. It's the size of a whale, but it's actually a fish. So unlike whales, it doesn't have to come to the surface to breathe. It's a filter feeder, so it simply opens its mouth and strains out the water," said Chris Lowe, director of the Shark Lab at Cal State Long Beach.

Despite being the largest shark in the ocean, capable of growing up to 45 feet long and 49,000 pounds, finding these amazing animals swimming in the sea can be a challenge.

But due to El Nino, with dramatically warmer waters and plenty of plankton, which they feed on, researchers are seeing unprecedented numbers.

Whale sharks have recently been spotted in Southern California, where we're seeing an unusually high number of animals rarely seen in this area.

"A whole cast of characters that we don't normally see in our coastal ocean," Lowe said.

From hammerhead sharks to green sea turtles and even a venomous yellow-bellied sea snake, which hasn't been seen in SoCal since a powerful El Nino in the early 1980s, experts say all these creatures are signs another strong El Nino is moving in.

But with these unusual sightings come serious concerns for the native animals whose food source has disappeared due to the dramatic warmup.

"We have 20 times the normal amount of sea lion strandings this past year, and many birds are washing ashore further north that rely on krill and other food items that are not available now," said Sandy Trautwein with the Aquarium of the Pacific.

Lowe has been tagging and studying juvenile great white sharks, which call our coast home. Born at 4 to 5 feet long, Lowe says these babies, known as pups, are raising questions about the impact of a monster El Nino.

"The interesting thing that we found is that none of the sharks that we've tagged in the last two summers have left," Lowe said. "Our winter water temperatures never really got below 60 degrees, so we're already seeing how El Nino is changing the behavior of some of our normal resident migrants."

He says it's a different ocean right now -- one giving us exciting glimpses into what lives in the deep and sounding alarms of possible permanent changes.