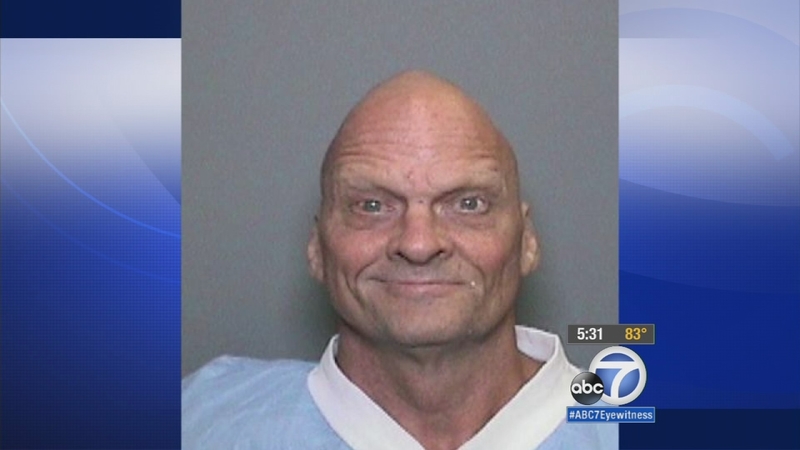 IRVINE, Calif. (KABC) -- An elderly woman is recovering Wednesday after a vicious attack from her alleged naked neighbor in Irvine.

A 75-year-old woman was walking down the street with her dog around 2:30 p.m. Tuesday when 51-year-old Craig Andrew Ledbetter attacked her from behind.

The victim's son-in-law, Neil Fitzsimons, moved into Irvine just three months before and was shocked to hear the incident happened in a place well-known as the "nation's safest city."

"We were expecting to be safe and something like this not to happen," Fitzsimons said.

Fitzsimons said Ledbetter yelled expletives before punching the victim repeatedly in the chest, knocking her to the ground and then sitting naked on top of her.

Family of the victim said she's in the hospital with a broken arm, bruises and other injuries.

"Her eyes are swollen shut, she can't see," said Fitzsimons. "She's essentially blind at the moment."

Police said they were forced to taze Ledbetter before taking him into custody, but it was not the first time they had been in contact with the suspect that day.

"He had been acting bizarrely but the officers in their investigation were not able to.. they did not have justification to take him into custody at that point," said Lt. Bill Whalen of the Irvine Police Department.

Neighbors said Ledbetter lives just a few houses down from the Fitzsimons' with his two children.

The suspect's ex-wife was inside the home when she said she was shocked over the incident, but mentioned Ledbetter had been acting strange the last few days.

Ledbetter is being held on $50,000 bail and is due to make his first court appearance Thursday.