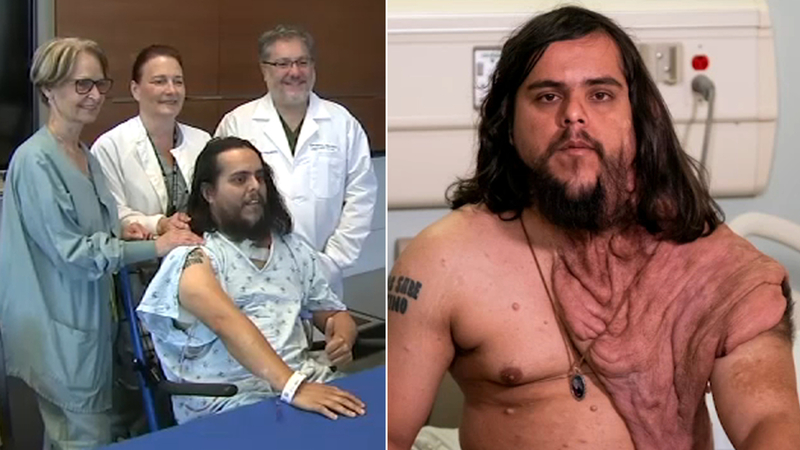 IRVINE, Calif. (KABC) -- A man from Paraguay born with a rare genetic disorder is thanking a team of surgeons at UC Irvine medical center.

Enrique Galvan was born with a disease that causes large, heavy tumors to grow on his nerve tissue.

"Neurofibromatosis, and he had some excessive skin growths," said Dr. Cris Barrios. "My plastic surgeon Dr. Mark Kobayashi felt it was too extensive to do down in Paraguay."

Galvan has undergone numerous surgeries in Paraguay, but none have been successful, causing him a lot of pain physically and emotionally.

He explained through a translator, "A lot of harassment, a lot of discrimination, and a lot of bullying."

But, his luck changed when he met Barrios, who was on a medical mission in his country. With UCI's blessing, Galvan flew in for surgery. Barrios and his team successfully removed most of the diseased areas in an eight-hour procedure.

"We ended up removing about six pounds worth of extra tissue, which was really his primary complaint, just the weight and the inability to do things," Barrios said.

Taking a literal weight off his shoulder, Galvan said he's eternally grateful and can't wait to play soccer and run when he gets home.

"I feel like a brand new person, I have more strength to keep going," he said through a translator.

Barrios will return with his group, IMA Helps, in July to check on Galvan. The doctor said it's work like this that helps fulfill him everyday.