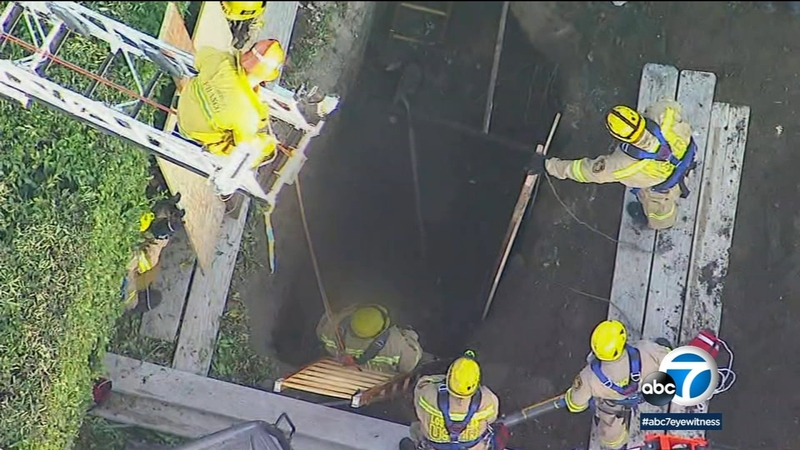 ENCINO, Calif. (KABC) -- A construction worker died in a partial trench collapse in Encino on Wednesday, according to the Los Angeles Fire Department.

Amid a rescue attempt by first responders, LAFD officials tweeted that the man "succumbed to his injuries and is beyond medical help."

Search and rescue teams recovered his body. The California Division of Occupational Safety and Health is investigating the work site, as the man died on the job.

The victim was approximately 10 feet deep in a trench that partially collapsed in the 5300 block of N. Louise Avenue. LAFD officials said the man was buried chest-high inside of the construction trench.

It's unclear if the victim fell in the trench or was already inside, but firefighters said the dirt is to blame for his death.

The man was working in the front yard of an Encino home when he got stuck in the deep hole.

Firefighters did what they could to save the buried worker for 40 minutes, but the dirt was too heavy for his body.

"It doesn't take much dirt and pressure to begin to constrict your vessels and especially if you get it up to your chest. It appears that this individual was not able to breathe and eventually succumbed to his death here on scene," said LAFD Asst. Chief Patrick Butler.

Rescuers had to board up the sides of the hole before they could lift the man's body out. Crews worked all night to make sure no one else got injured in the process.

The mayor's crisis response team was called to support friends, family and co-workers of the victim, fire officials said.