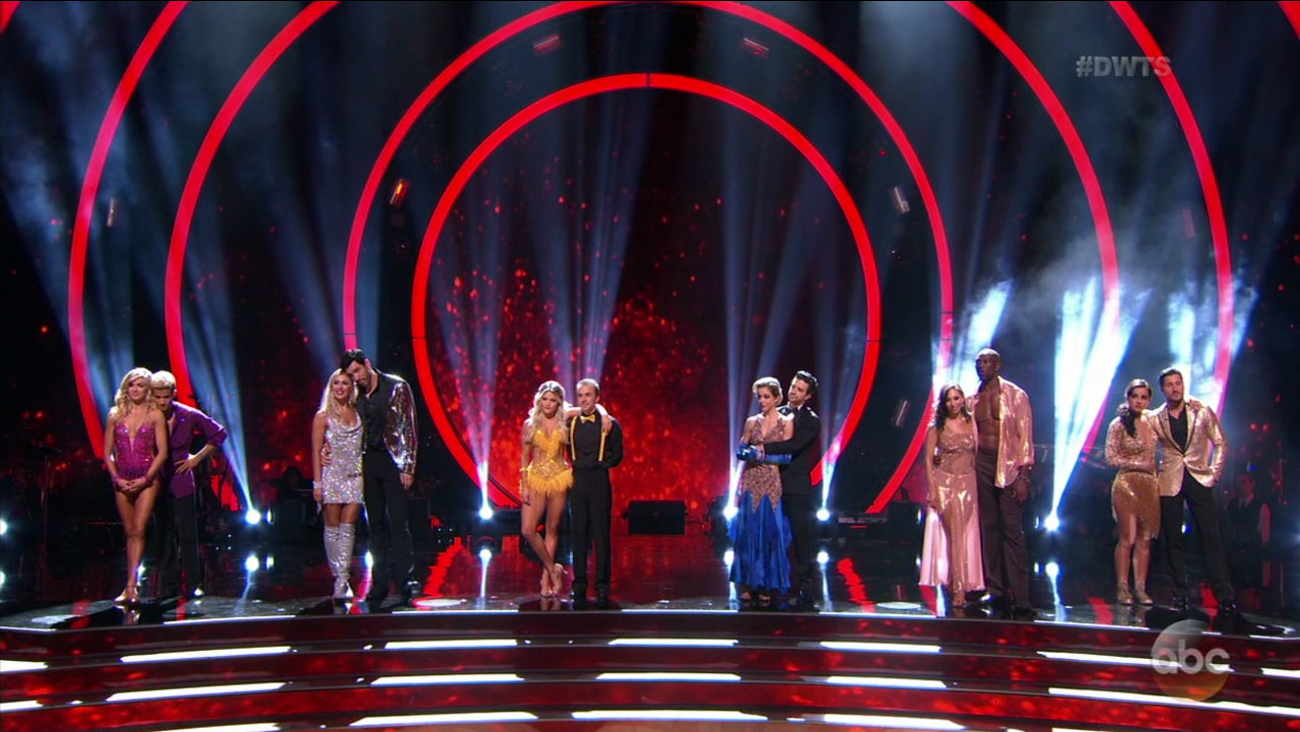 The remaining couples of "Dancing with the Stars" season 25 line up during the elimination phase of the show on Monday, Nov. 6, 2017. (KABC)

LOS ANGELES -- The six remaining celebrities on "Dancing with the Stars" had their work cut out for them in week eight.

The task? Two full routines. One, an individual dance they had not yet performed, plus a trio dance with a favorite celeb from a previous season.

Here's a rundown of the night's dances, from highest score to lowest:

Jordan Fisher- 30 out of 30 for Quickstep; 30 out of 30 for trio - 60 out of 60 total
Jordan felt the pressure but said he didn't want to let Lindsay down. She's the only pro dancer still in the competition who doesn't have a mirror ball and he is determined to help her win one. Their dance blew the judges away, with Bruno Tonioli calling it demanding, intricate and outstanding. Carrie Ann Inaba thought it looked like Bob Fosse and Austin Powers had a "sassy and brilliant" baby. Head judge Len Goodman simply stood and gave them a standing ovation.

Season 17 runner up Corbin Bleu was drafted to dance the Salsa with Jordan and Lindsay. They had an instant "bromance," with Jordan telling Corbin he had been one of his role models. When he first saw Corbin in "High School Musical" it was the first time he'd seen a mixed-race kid in the spotlight and it inspired him. The trio knew they had to live up to some high expectations, and they did not disappoint. Carrie Ann called their Salsa "#amazeballs." Len loved everything about it, and Bruno said this routine will go down in DWTS history.

Lindsey Stirling- 26 out of 30 for Samba; 28 out of 30 for trio - 54 out of 60 total
Lindsey said the injury to her ribs crushed her spirit last week and she's working hard not just to dance but, more importantly, return to the joy she had felt earlier in the season. Mark told her the injury was just a setback but they are both fighters. Both Bruno and Carrie Ann appreciated the creativity of this non-standard Samba, but Len thought it was a little too funky.

It's been nine years since Kristi Yamaguchi won her mirror ball with Mark, but she happily came back to join the trio with Lindsey. Their jazz dance was good old fashioned fun and earned a "10" from Carrie Ann, who said she would pay money to see a dance like this.

Frankie Muniz- 26 out of 30 for Viennese Waltz; 27 out of 30 for trio - 53 out of 60
The pressure of perfection from last week's "30" is weighing on Frankie. He said it felt odd to see his name on the top of the leaderboard. Witney reminded him that he has zero dance experience and he's come quite a long way in two months' time. Bruno told him the dance was stylish and elegant. Carrie Ann called it exquisite and clean, and Len burst their bubble a little, telling them the dance was far from perfection.

Past champ Alfonso Ribeiro jumped in for the jive in the trio dance. Witney thinks the two guys are very similar in their style of learning and both Witney and Alfonso want Frankie to be more confident. So do the judges! They got three "9s," and good comments from all. But it was Len who almost scolded Frankie and told him he didn't want to hear any more comments about not being a good dancer. Len said both having the skill AND the will are equally important, so just come out and perform!

Terrell Owens- 27 out of 30 for Charleston; 24 out of 30 for trio - 51 out of 60 total
The football star admitted to being bummed about being at the bottom of the leaderboard last week. But Cheryl would not allow a pity party and promised to keep pushing him. He was up for the challenge and said it's not how you start, it's how you finish. Len liked the way the routine took him back to the 20's and told Terrell no one has improved as much as he has over the season. Bruno also thinks Terrell's star is rising, and Carrie Ann said he's peaking at the right time.

Terrell adds first season champ Kelly Monaco for the trio dance. It's a super sexy Rumba. There's lots of flirting going on in the rehearsal room, with Kelly telling Terrell he looks like he's sculpted out of heaven. For their performance, the judges gave them "8s" across the board.

Victoria Arlen- 24 out of 30 for Argentine Tango; 24 out of 30 for trio - 48 out of 60 total
Victoria had a health scare a few hours before the show; a bad spasm that left her unable to move. She worked her way through the pain, and through the mind games. She was challenged with this sexy dance, and she admitted to Val she's never played a role like this. He warned her not to break character; one can very quickly go from sexy to silly. All three judges liked the dance but agreed that she needs to work on acting the part a little more.

Victoria got to have some giggly girl fun with her trio partner, Laurie Hernandez. Val realized the two young women are very similar, with a shared Olympic history, big expressive eyes and a love of Star Wars. They got straight "8s" for their jive, with the judges wanting things to be just a little bit sharper.

Drew Scott- 22 out of 30 for Waltz; 25 out of 30 for trio - 47 out of 60 total
Drew felt like these eight weeks were a roller coaster ride, but one he's happy to be on. He also felt like he could be a contender. Emma tried to get him to tap into his emotions for this Waltz. He dedicated it to his fiance and said she completes him. Len called the dance charming, but called Drew out on an issue with his elbow and frame. Carrie Ann thought he looked a little unsure and encouraged him to stay strong and commanding, while Bruno told Drew he looked a little stiff, but thought the dance was a romantic dialogue set to music.

Last season's champ Rashad Jennings joined in for the trio, a Cha-Cha. Rashad did his best to coach Drew on honing his "swag skills." Bruno thought Drew did a good job of keeping up with Rashad, most of the time.

The rapid fire results came during the last two minutes.

In the end it was time for Terrell to hang up his dance shoes.

Five celebrities return next week for the semi-finals!
Report a correction or typo
Related topics:
arts & entertainmentcelebritydanceabcdancing with the starsreality televisionballroom dancing
DANCING WITH THE STARS