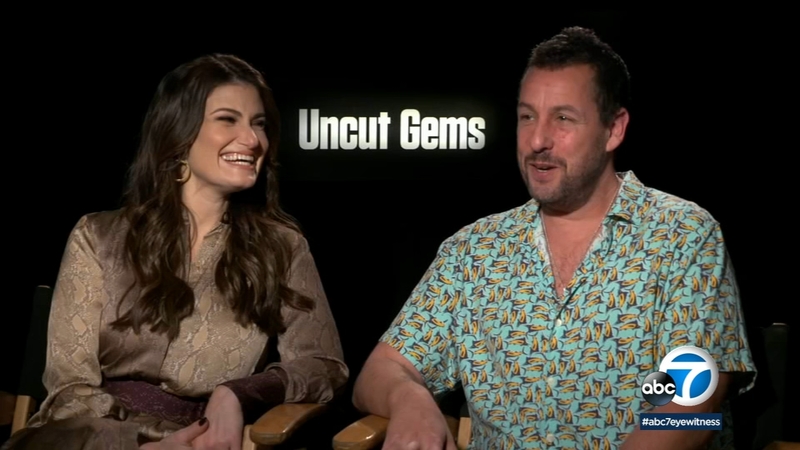 Adam Sandler explores many facets of acting with 'Uncut Gems'

HOLLYWOOD (KABC) -- In the new film, "Uncut Gems," Adam Sandler plays a New York City jeweler who seems to be making one bad decision after another, all in an attempt to hit it big. Sandler's role in this sometimes gritty dramatic crime thriller is winning him rave reviews. Just don't tell him that!

"I haven't read them," admitted Sandler. "I do get phone calls from my friends who are fellow guys who get bad reviews and they're like, 'What the hell is happening right now? Don't you dare leave us! Stay with the bad!' I've been bad at that my whole life, except if someone said I was good at baseball, I'd be like, yeah?"

Idina Menzel has a supporting role in the film, playing the unhappy wife of Sandler's character. But she was really happy to be a part of this experience.

"I had no idea that this film was going to be what it is," said Menzel. "I'm so excited for them and I'm honestly glad just to be in it and like hanging out with this guy in it!"

"It's fun! Even though the guy is making mistakes, even though we're not doing too well together. It's kind of a fun little ride of a movie," said Sandler.

"Uncut Gems" opens wide on Christmas Day but in its limited debut, it became the biggest opening yet for the indie entertainment company, A24.

For Menzel, it's on the heels of her other hit movie this season, "Frozen 2," which has now made more than a billion dollars worldwide.