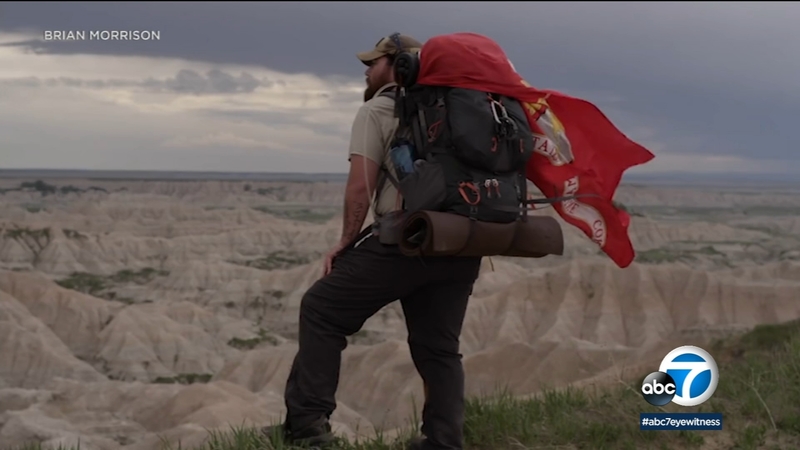 HOLLYWOOD -- There is an eye-opening new documentary that takes us on a journey with a Marine combat veteran. It takes a hard look at PTSD, suicide and, most importantly, healing.

The film "Bastards' Road" features a Maryland man walking across the country. Jon Hancock spent 15 months walking 5,800 miles, visiting both fellow Marines from his battalion and families of those brothers who didn't make it home alive.

During his eight years in the Marine Corps, Hancock did battle in Iraq. In 2016, he was battling something else: PTSD. His cross-country journey became a life-saving event...now chronicled in the documentary, "Bastards' Road."

"Had I not taken this walk and had I not really started to learn about self-accountability right now and really holding myself to task, I wouldn't be where I am right now," said Hancock.

"It was Jon's journey and we find it an incredible--incredibly intimate portrait of him, first and foremost," said Brian Morrison, the director and producer of "Bastards' Row."

"I had emptied a medicine cabinet full of pills into my stomach and then drove myself to the Baltimore V.A. following a second DUI," said Hancock.

During Hancock's journey, you also hear the stories of his Marine brothers, many of whom have also struggled.

A former Navy medic who served in Afghanistan is seeing similar duty as a licensed vocational nurse during this pandemic.

Hancock was healing step by step. Today, life is good. He's now passing on his war wisdom to help other military members. He's even started a non-profit dedicated to taking vets on long distance hikes to help heal the wounds of war.

During his own walk, when food wasn't really available--how did he keep going?