Miguel Puga won his first Emmy trophy as co-executive producer for the show 'The Casagrandes' and did so by incorporating his hometown of Boyle Heights into his work.
KABC
By Eric Resendiz 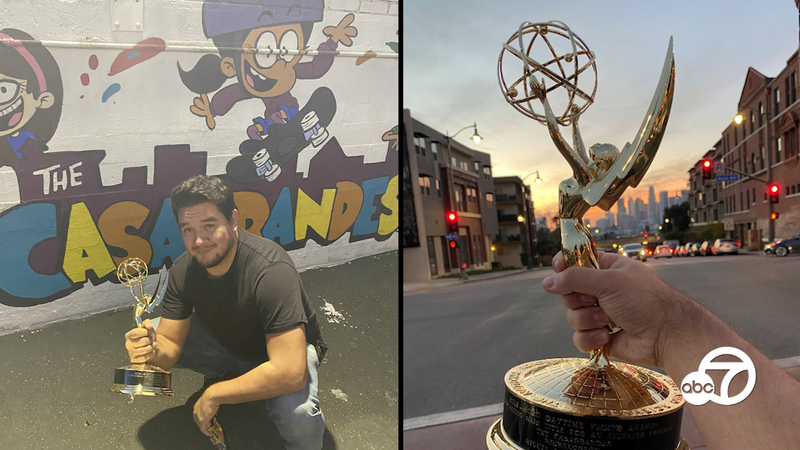 BOYLE HEIGHTS, LOS ANGELES (KABC) -- An Emmy award is one of the most prestigious recognitions within the television industry.

Boyle Heights native, Miguel Puga, shares his first Emmy trophy with a photo tour in his community. Puga is a co-executive producer for the show #TheCasagrandes and included his hometown into his work. Watch his story today at 5 p.m. on @ABC7 pic.twitter.com/PhXRBJOaL7

"It's something that I never knew I was gonna get. And, you know, I do pinch myself. I did sleep with it ... I take it everywhere," said Puga. "It was something that was like you know, just showing kids that this is attainable."

Puga is a co-executive producer on the show 'The Casagrandes,' which won a Daytime Emmy award for Outstanding Main Title for an Animated Program this year.

The show is about a Mexican-American family.

"I'm drawing kids that, you know, represent where I'm from," said Puga. "Casagrandes ... it's kind of like Boyle Heights meets Bronx. So there's a lot of storefronts that you see driving down Whittier Boulevard or Cesar Chavez."

Puga discovered his passion for drawing in elementary school, which was also a stop on his photoshoot.

"I did take it to the front of my elementary school. And I was like, 'I was just a kid in here.' And, you know, I'm holding this now ... this is it's just hardware. But it's something that represents all the hard work I've done," said Puga.

This is his first Emmy trophy and he attributes a lot of his success to many people, especially his parents who immigrated from Mexico.

When Casagrandes meets ABC7! 👌🏽😍 I'm working on a story about Miguel Puga who won his 1st Emmy trophy as co-executive producer for the show 'The Casagrandes' and did so by incorporating his hometown of Boyle Heights into his work. pic.twitter.com/V7Re2hK5Xj