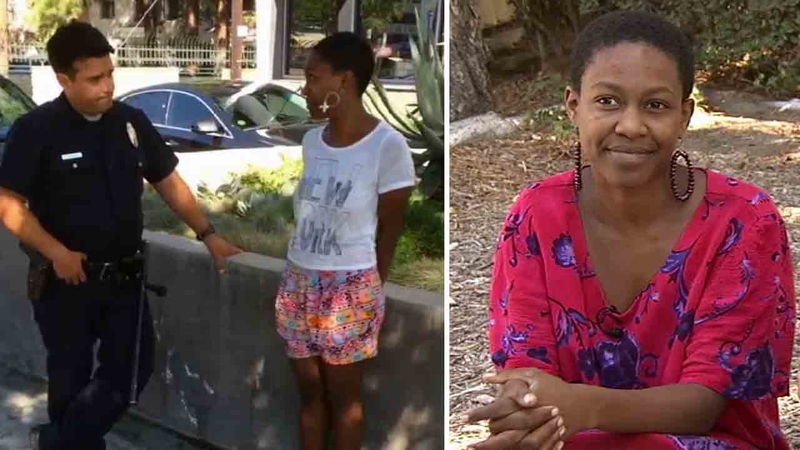 'Django Unchained' actress speaks out after being detained

STUDIO CITY, Calif. (KABC) -- The Hollywood actress who claims she was accosted by LAPD officers in Studio City spoke out Sunday. She says police put her in handcuffs after mistaking her for a prostitute.

Daniele Watts maintains the only thing she did was kiss her boyfriend while sitting in a car. The actress says she doesn't understand why the police treated her like a criminal.

Home video posted online shows Watts in tears as she talks to the LAPD officer who detained her.

Watts is best-known for her role in the film "Django Unchained" and also appeared in the former Showtime series, "Weeds."

Watts says she was in a parked car with her boyfriend Thursday afternoon before she was confronted by the officer.

"A squad car pulls up from behind me and yells at me to put my hands against the wall," Watts said. "In that moment, I was really afraid so I put my hands up and I said, 'I haven't done anything wrong.'"

Watts and her boyfriend, Brian Lucas, were in a car parked at Radford and Ventura boulevards in Studio City. The actress says the car door was open and she was sitting on Lucas' lap kissing him when a man approached them.

"A Caucasian guy in a business suit comes downstairs and says, 'Can you guys stop putting on a show? I have people who are trying to work up there,'" Watts said.

Minutes later, two LAPD officers arrived on the scene. Los Angeles police say they were responding to an indecent exposure call from a concerned citizen.

Watts says she was on phone with her father at the time and walked away from the car. Lucas says the officers asked for identification and started questioning him.

"How do you know her, what relationship, they were questions that quite frankly made me feel like that they were questioning me being like the client of a prostitute," Lucas said. "He didn't say anything ever about that, I just felt that energy from it."

Watts says she was handcuffed after refusing to show identification.

"I said, 'excuse me officer, I have not done anything wrong and I know that it's not lawful for you to require that I give you my ID,'" Watts said.

Watts is upset about the way she was treated.

"It occurred to me that he believed whoever called him and assumed that I was doing something lewd," Watts said.

Watts was released after her boyfriend gave police her identification. The LAPD says an internal investigation of the incident is underway.