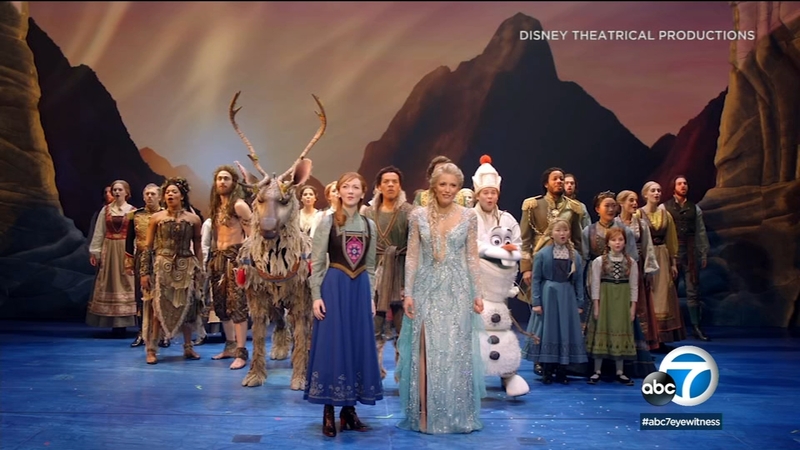 HOLLYWOOD (KABC) -- While Disney's movie sequel, "Frozen 2" dominates movie theaters, the first national tour of the "Frozen" Broadway musical kicked off in Hollywood. The cast members of "Frozen: The Musical" are warming the hearts of audiences at the Pantages Theatre. There are plenty of familiar characters... and familiar songs... but so much more.

"We have some new stuff to share with people, even the diehard fans," said Caroline Innerbichler, who plays Anna. "I'm very excited to hear responses for that."

"There are 12 new songs and each one is an example of what theater can bring to storytelling," said Mason Reeves, who plays Kristoff.

Of course, there are those songs... and moments... that the audience anticipates seeing: so much so that sometimes they even sing back to the actors on stage!

"It has happened! I've never been in a show where people have known the songs so well," said Caroline Bowman, who plays Elsa and sings the hit "Let it Go." It actually makes me feel lifted, I feel like I'm being carried through the show and they are totally on board with me. So I love it."

Bowman also feels the support from co-star, and husband, Austin Colby who happens to play Hans... one of her sister Anna's suitors! But in reality, the acting couple doesn't share much stage time!

"We really don't see each other that much," said Colby. "We kind of pass backstage and high five each other. Your turn!"

"But I get a little heart at the end of 'Let it Go', every night, a text message from him," revealed Bowman. "So we're just constantly supporting each other. It's really cool."