KABC
NEW YORK -- "Hamilton" is not throwing away its shot. Instead of a theatrical release, "Hamilton" will be released by The Walt Disney Studios on Disney+ July 3, 2020.

The 11-time Tony Award-winning musical was originally set to be released in theaters on Oct. 15, 2021. The musical features the original Broadway cast and was filmed in 2016.

The cast of "Hamilton" performing at the Richard Rodgers Theatre in New York City.

The film is not like other movie musicals where the production is re-created on a set, but rather it is a filmed version of the show straight from the Richard Rodgers Theatre prior to the original cast leaving in 2016.

The movie will transport its audience into the world of the Broadway show in a uniquely intimate way, creating a new way to experience "Hamilton."

"He's giving everyone at home the best seat in the house, it's a thrilling experience, he really threads the needle between the cinematic closeups and widening out and seeing the show from the center aisle of the Richard Rogers Theatre, so I can't wait for you all to see it," Miranda said.

"I think it's brilliant in these times to tell a story of people coming together against forces of adversity is quite relevant and actually quite important," Iger said.

"Hamilton" debuted on Broadway in 2015 and has won numerous awards including 11 Tonys, a Grammy, an Olivier and a Pulitzer Prize. 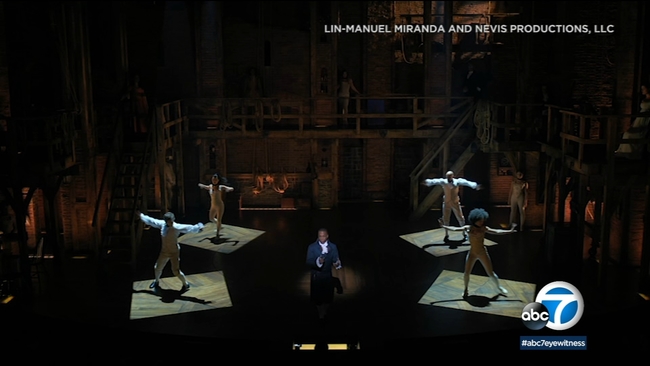