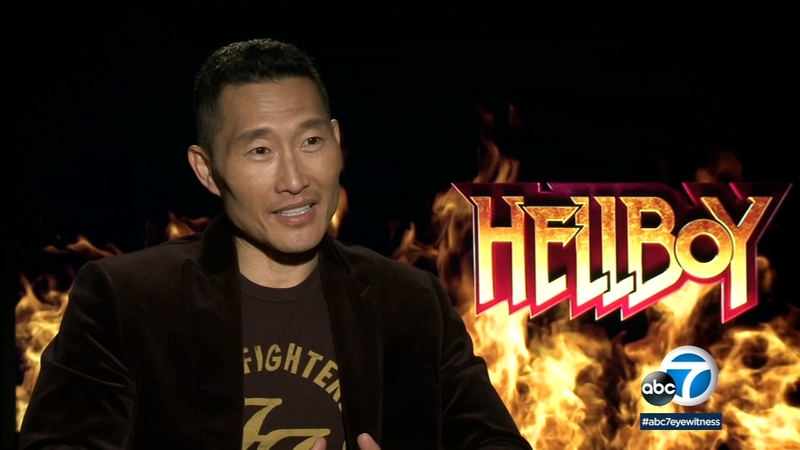 HOLLYWOOD, LOS ANGELES (KABC) -- Actor Daniel Dae Kim is no stranger to working on projects with a devoted fan base. Following his turns in hit TV series "Lost" and "Hawaii Five O," he's been thrilled by the response about being a part of the graphic novel based "Hellboy."

Kim says it's important to get things right for those die-hard fans.

"It's exciting to have a fan base that's so ardent about your show and you want to see it succeed," said Kim. "There's something about Sci-Fi and fantasy fans, too. They identify so deeply with the project that you feel like family to them and that's kind of great."

Being cast in "Hellboy" has extra special meaning for Kim. The part originally went to another actor, Ed Skrein. But the original comic book character of Major Ben Daimio is of Asian heritage. And fans were not pleased that a white actor got the role. Skrein gracefully stepped aside and Kim was cast.

"We can fight all day long for diversity and inclusion but it's so much more powerful when it's a collective effort, and it's not just the minorities speaking for themselves but all of us speaking for one another," said Kim. "And that's why Ed's actions were so powerful. You can talk all day long about an issue but an action is worth so much more."

Kim spent the spring playing the adversary to Dr. Shaun Murphy on ABC's "The Good Doctor." He's also an executive producer on the hit series; and when we last saw his character, he'd been fired!

"Judging from the public sentiment, he should be kicked out for good!" laughed Kim. "I really enjoyed the fact that the character elicited such a strong reaction from fans and as one of the producers of the show, I love the fact that because you hated him so much, you loved Shaun even more."