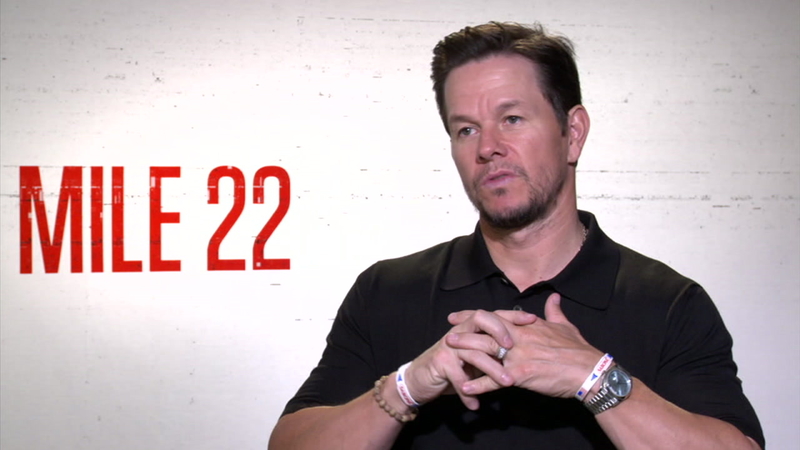 Mark Wahlberg produces and stars in the thriller, 'Mile 22'

LOS ANGELES (KABC) -- Mark Wahlberg is the star and producer for the latest action blockbuster, "Mile 22." It tells the story of the CIA's most elite and secretive unit: Overwatch.

"What we wanted to do, we wanted to create a really cool, smart, action movie that really builds character until the action starts, so you can really get invested in these guys, and what's going on and the mission and, you know, this kind of unique world and a division of the CIA that you've never seen before," Wahlberg said.

Wahlberg plays Jimmy Silva in the movie, a character he said was originally meant to be a small part.

"It's a very intense character. I mean, it originated as I was just going to play a small part, and I was going to be one of the bad guys, and everybody started falling in love with the Jimmy Silva character," Wahlberg said. "He's the kind of guy who moves to the beat of his own drum. He does whatever he wants, whenever he wants, especially when he gets the green light."

Wahlberg said he enjoys being completely involved in the projects he chooses.

"I don't just put my name on anything," Wahlberg said. "I have to be completely engulfed in it and making sure that it has the best chance to succeed especially when somebody's, you know, make a major investment in this idea that we had, and, you know, we want to make sure it's successful."
Report a correction or typo
Related topics:
arts & entertainmentmovieactorcia
Copyright © 2021 KABC-TV. All Rights Reserved.
TOP STORIES
CDC reverses course on indoor masks in some parts of US
How do new CDC guidelines affect SoCal?
1 killed, 1 wounded in shooting at Corona movie theater
Arrest made in fatal shooting of Rite Aid clerk in Glassell Park
CSU to require all students, staff to get COVID-19 vaccine
OC congresswoman introduces Kobe Bryant Day resolution
Bay Area teen attacked by crocodile while vacationing in Mexico
Show More
Video: Dog thrown from truck in West Hills crash
OC restaurant requires customers to prove they are not vaccinated
Simone Biles explains why she 'took a step back' from team finals
'This is how I'm going to die': Officers tell Jan. 6 stories
Parents in Tustin protest school mask requirement
More TOP STORIES News