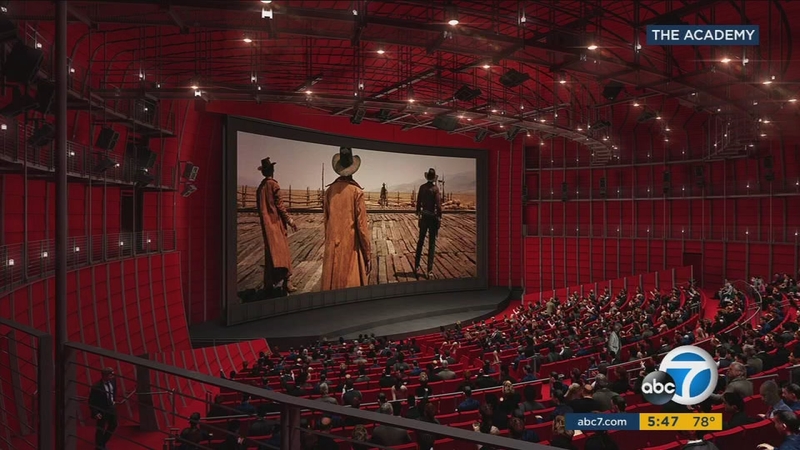 LOS ANGELES (KABC) -- One night a year, the Oscars celebrate every aspect of the film industry.

The Motion Picture Academy Museum, set to open on Miracle Mile in 2019, is being constructed to cover the rest of the year.

"It's about time. We are the moviemaking capital of the world and we've never had this museum here. We finally will," said Los Angeles Mayor Eric Garcetti.

Project backers are raising $388 million. Billionaire Haim Saban and his wife Cheryl gave a $50 million gift which has helped the museum raise 75 percent of its funds.

The project is taking shape and curators are busy plotting the inside, collecting Hollywood memorabilia.

"There's going to be a permanent exhibition which will weave together the moving image with the actual objects we have in the collection. And also it will be immersive. You will feel like you're back in time in certain areas, that you're actually seeing how movies got made," said Kerry Brougher, the director of the Academy Museum of Motion Pictures.

Eyewitness News took a tour of the construction site which will include two theaters, one holding 1,000 visitors and a restaurant. There will also be spaces for rotating exhibitions which could include a retrospective on a director. There will also be an experience where guests can walk the red carpet and receive their very own Oscar.

The celebrated architectural structure, the May Company building at Fairfax and Wilshire, will be renamed the Saban building. Its exterior will mostly remain the same as it's looked since being built in 1939.

"It's good for our economy because that's visitors and jobs. It's good for our soul because we remember where we came from and how we grew up and it's great for our kids who I think can come in their own town to see how stories are made," Garcetti said.
Report a correction or typo
Related topics:
arts & entertainmentmiracle milelos angeleslos angeles countyoscarsmuseums
Copyright © 2021 KABC-TV. All Rights Reserved.
TOP STORIES
LA County expanding vaccine hours as COVID-19 spikes
Fauci warns 'things are going to get worse' with COVID
Fire burns 27 acres in Irwindale
Longtime soap opera actor Jay Pickett dies at 60
4 killed in helicopter crash in NorCal, NTSB investigating
Burbank retirement home employee fatally stabbed by former co-worker
Who's the toughest lifeguard in Los Angeles?
Show More
MTV marks 40 years with new 'Moon Person' design
24K gold tequila bottle sells for $300
Too late, Texas couple changes minds about COVID-19 vaccine
DaBaby dropped from Lolla lineup due to recent homophobic comments
Construction worker hit, killed by drunk driver on 10 Fwy in Ontario
More TOP STORIES News