O'Shea Jackson Jr. shows off comedic side in 'Long Shot'

The 28 year old actor burst onto the scene back in 2015, playing his real life Dad, Ice Cube, in the blockbuster "Straight Outta Compton." He followed that up with an independent comedy, "Ingrid Goes West." Following that up with "Long Shot" is just icing on the cake.

"This is the biggest comedy I've had. 'Ingrid Goes West' was a little bit more cynical. It was a dark comedy but this is a smart comedy," said Jackson. "It's got great jokes in it and it's got a great cast and I love being the enthusiastic best friend. How could you not love that role? I feel like I've known Seth my whole life. I've been a fan for so long. It's just great to be able to step up to the plate and to be able to run with a guy like that."

Charlize Theron and Seth Rogen take a "Long Shot" at both politics and romance in new big screen comedy.

One thing Rogen and all the people working on the film encouraged during the shoot, was collaboration.

"They want you to shine. They make sure that you know that we picked you for a reason," said Jackson. "Do you. Be what we chose. It's got the writers on the side throwing you lines; you're throwing them back and trying to see how you can make it your own. Once you find that gold, you can tell on the set, when you hit." 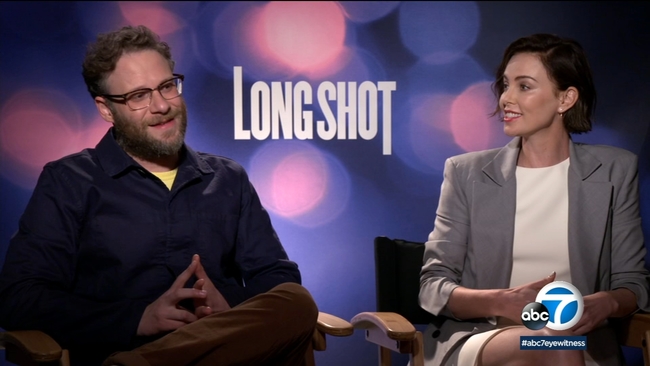