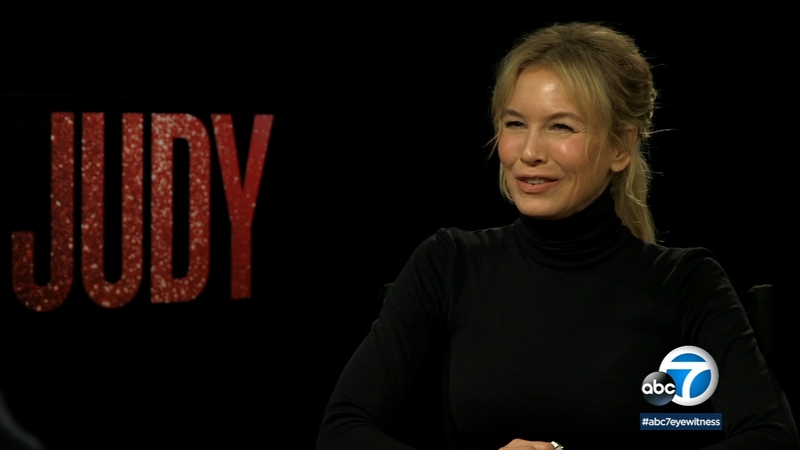 HOLLYWOOD (KABC) -- Renee Zellweger is winning rave reviews for her starring role as Judy Garland in the new film, "Judy." Taking on this project, the Oscar winner knew she had a lot to accomplish, including singing some of the songs Garland made famous.

"Judy" takes place in late 1968, just months before Garland's death at the age of 47. At this moment in her sometimes troubled life, Garland accepts a job in London for a series of sold-out concerts. She is seen as fragile and funny... struggling and strong... graceful and loving.

"No one ever knew her other than a famous and beloved performer because she was 2-years-old when she stepped on the stage," said Zellweger. "So the public persona and human being were sort of synonymous."

Zellweger did copious amounts of research before tackling the role of this iconic persona.

"Oh gosh, I was spoiled rotten!" said Zellweger. "Every chance I got I was going down the YouTube rabbit hole to see what's available out there. And how special was that? What a treasure trove!"

To get Judy's look, Zellweger wore dark contacts and a prosthetic on her nose. Garland's teeth were another story.

"They changed all the time in every photograph that I would see and then I learned later on that she wore snap-on veneers from the time she was quite young," said Zellweger. "Sometimes she did, sometimes she didn't! So we went with what was, you know, what seemed closest to her own authentic smile."

Getting the voice down began with Zellweger singing alone in her car. Eventually she worked with a composer and three vocal coaches the whole time to learn the style of Judy's singing and her performance qualities.

"Not her God-given resonance and the quality of her voice-- which is one in a million years," said Zellweger. "But I tried to look at it intellectually and then just be in denial about all the rest. It was just a process."