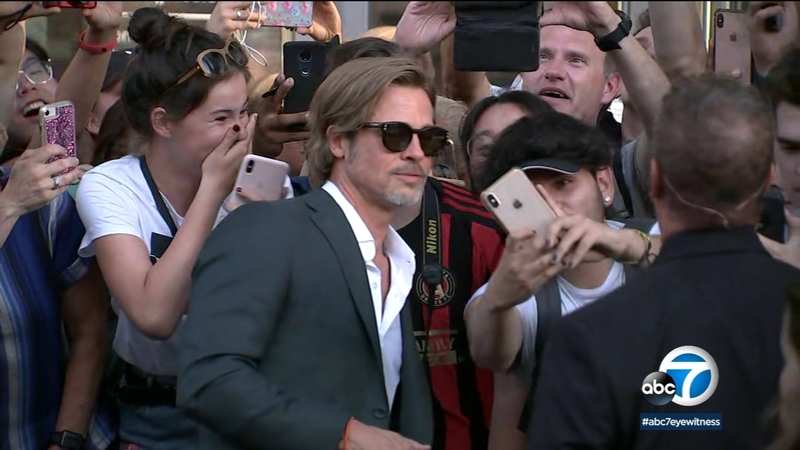 Stars attend 'Once Upon a Time in Hollywood' premiere

HOLLYWOOD (KABC) -- "Once Upon a Time in Hollywood" is a movie about Hollywood, so of course it made sense the film would hold its world premiere in Hollywood. And as has become his signature style, writer-director Quentin Tarantino delivers the unexpected.

It was a thrilling moment for hundreds of adoring fans who lined Hollywood Boulevard outside the TCL Chinese Theater. Brad Pitt and Leonardo DiCaprio charmed the vocal group, taking time out to shake hands, pose for selfies and sign autographs.

In the film, DiCaprio plays a 1960s television star and Pitt is his longtime stunt double.

"It was really automatic for us," aid Pitt. "He (DiCaprio) is such a good egg. He works damn hard and believe me I was really to have someone else carrying the weight"

The film is set in Los Angeles in 1969... a time of change in the film and television industry. It was also the year of the Manson murders. Margot Robbie plays Sharon Tate, the actress who was slain during the massacre. Tarantino wanted to make sure the film paid tribute both to the era, and to his beloved hometown.

"It seems kinda perfect for wrapping up a career in Hollywood," said Tarantino. "I make a movie about Hollywood. I think it's kinda lovely."