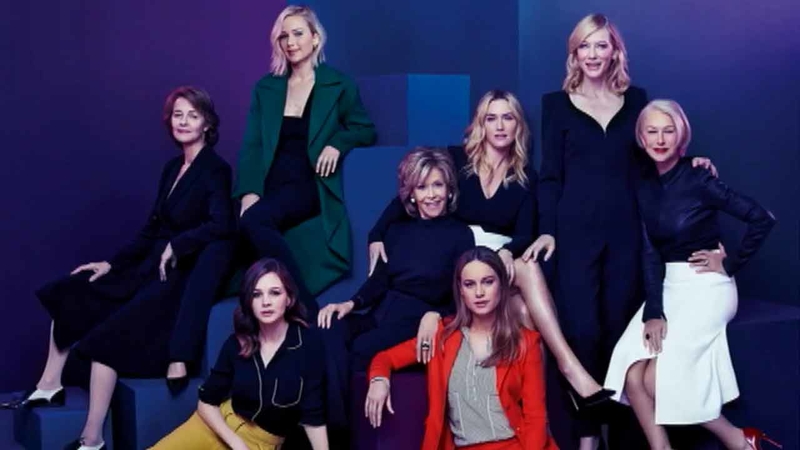 LOS ANGELES (KABC) -- The Hollywood Reporter is celebrating what it calls "The Great Eight," the magazine's top picks on actresses considered to be contenders for this awards season, but the photograph is causing controversy as all women are white.

Charlotte Rampling, Carey Mulligan, Jennifer Lawrence, Jane Fonda, Kate Winslet, Brie Larson, Cate Blanchett and Helen Mirren are the this year's chosen ones for the magazine, which caused a bit of a stir on social media.

People feverishly tweeted their reactions to the article. There were plenty of calls for change, and for pushing forward with more diversity in the Hollywood system.

The Hollywood Reporter said it based its article on expert opinions, early buzz from film festivals and other factors and from there, does round-table interviews with potential award contenders.

Executive editor Stephen Galloway said the lion's share of responsibility for the lack of women of color falls on the Hollywood studios that create and cast the movies.

"The awful truth is that there are no minority actresses in genuine contention for an Oscar this year," Galloway wrote. "Speak to the executives that run the industry, and they say they want change. But there are hardly any black film executives and too few producers. Black directors? Not enough -- and certainly not black women directors."

Galloway added, "If there were far more minority men and women to choose from, this sort of hand-wringing would never exist, and it's about time it changed."

Tanya Hart with American Urban Radio Networks said big studios should take notes because minorities will hit them where it hurt most - their paychecks.

"If people cannot go to the movies and see themselves, they won't buy tickets. They won't go to the movies. It's over," Hart said. "With all of the new media that we have right now, you know, and all of the ways and all of the different platforms that you have to do your own projects, which a lot of people are doing, the studios better watch out."
Related topics:
arts & entertainmentlos angelescelebritymovieshollywoodhollywood wrap
Copyright © 2021 KABC-TV. All Rights Reserved.
HOLLYWOOD WRAP
Tanya Roberts still alive, rep says day after reporting her death
Tanya Roberts, Bond girl and 'That '70s Show' co-star, dies at 65
Action star Jet Li learns to sit still for Disney's 'Mulan'
Bryan Cranston stars in 'The One and Only Ivan' from Disney+
TOP STORIES
Corona shooting: Anthony Barajas, 19, dies after days on life support
Bacon may nearly disappear in California as pig rules take effect
Villanueva: 'Grave concerns' over deadly shooting by deputies on video
The Abbey in WeHo requires proof of COVID vaccination or negative test
Bacteria at beaches near Dockweiler continues to exceed standards
Florida new national epicenter after record number of new COVID cases
5-month-old baby dies after being ejected from car in Torrance crash
Show More
Family decries controversial arrest of Texas teen
Judge recuses himself from rape case against OC couple
Venice homeless encampment: Crews continue cleanup as deadline arrives
Disney joins list of companies requiring vaccine for nonunion workers
Highway 38 reopens after mud, debris flow forced closure
More TOP STORIES News