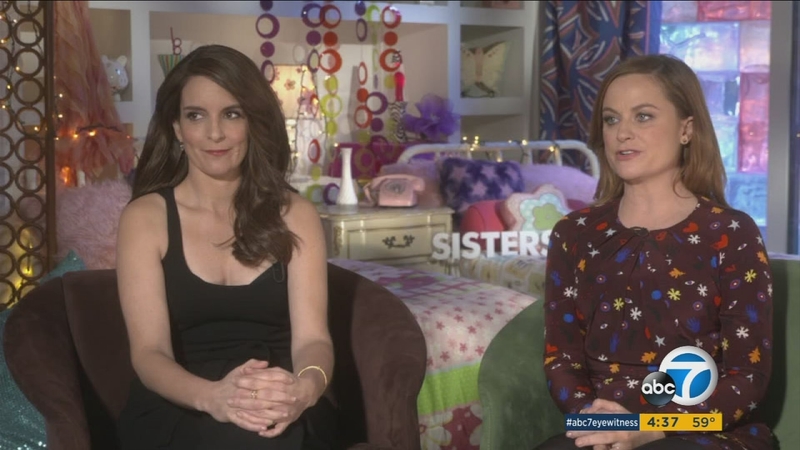 HOLLYWOOD, LOS ANGELES (KABC) -- Tina Fey and Amy Poehler teamed up once again in the movie "Sisters," but they aren't just the stars of the new big screen comedy.

Poehler also served as an executive producer and Fey was one of the film's producers.

Fey and Poehler said they enjoy having a full plate on their hands.

"Even when were improvisers in Chicago 20 years ago, you had to be writing, acting, directing, thinking, editing all on the spot," Poehler said. "So that idea of multi-tasking in that way is pretty natural."

In "Sisters," Fey and Poehler play siblings in their 40s who have a hard time facing the fact their parents want to sell their childhood home.

Old feelings, both good and bad, emerge as they throw one last mega-party in their parents' house.

The film marks the first time the duo have produced a movie together, but it's something they hope to continue to do.

"Amy and I were both producers in television for a while now and to learn how to do it in movies too, I'm very excited about it, and it's important to both of us," Fey said. "Because the goal is to be able to keep working and working with people we like and making movies that we like and want to see and I think the road to that, the road to more women in film, is to get more women in these other positions."

Fey and Poehler do not have sisters in real life, but the two lifelong friends call each other "chosen sisters."

"There is nothing like a female friendship, there really isn't. It last your entire life. Men come and go and the women usually in your life stick around and they're there for a lot and they go to the deep end with you really fast and if they're people you can trust, the love and respect you have for each other isn't measurable, so that is very important to me and to us," Poehler said.