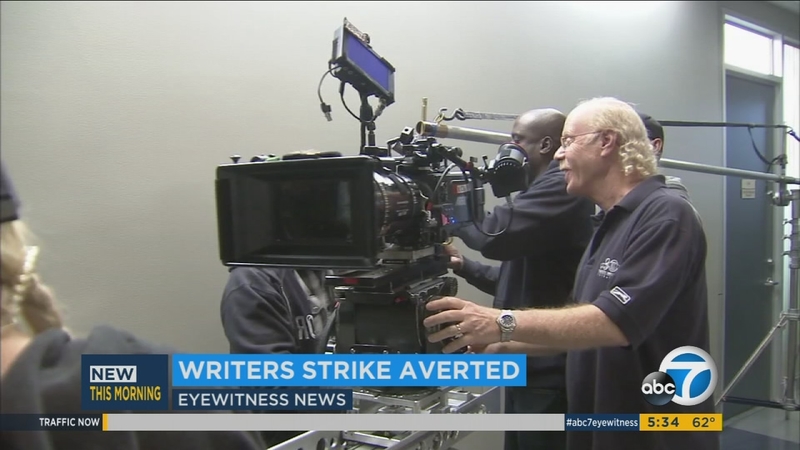 LOS ANGELES (KABC) -- Screenwriters and producers reached a tentative deal on Tuesday, averting a strike that could have crippled TV and film production.

The three-year agreement, which requires ratification by members of the Writers Guild of America, was confirmed by the guild and Alliance of Motion Picture and Television Producers' spokesman Jarryd Gonzales shortly after the current contract expired early Tuesday morning.

The deal came after last-minute bargaining conducted during a media blackout that offered no tangible details about whether picket lines would go up until after midnight Tuesday.

In a memo to its members, the guild said gains were made across the board, including contributions to the union's health plan that should "ensure its solvency for years to come" - an issue that writers considered key.

Also, the union said it made strides in pay for series with fewer episodes per season, and in residuals.

The memo stated that members will net $130 million more over the contract's life than they were expected to accept.

There were no details released by the producers early Tuesday.

The agreement spares the late-night shows that would immediately have gone dark without writers, and allows the networks to pursue their schedules for the upcoming TV season without interruption. Movie production would have felt a strike's sting more gradually.

Prior to Tuesday, guild members voted overwhelmingly to authorize a strike, and the WGA could have called for an immediate walkout Tuesday absent a deal.

The last time the guild went on strike was in 2007. The work stoppage, which lasted 100 days, brought the industry to a halt, costing California's economy an estimated $2.1 billion.